In the exhibition of János Vaszary, a foremost master of Hungarian fine art distinguished by great stylistic diversity, twenty-four out of the presented seventy paintings were previously unknown to the public as well as to professionals. The paintings encompass virtually the entirety of Vaszary’s oeuvre, from his early impressionistic period to his expressive compositions, from his art deco style in Paris to his Danube Promenade pictures and seaside scenes with a Mediterranean ambiance.

János Vaszary (1867–1939) is one of the most versatile figures of twentieth-century Hungarian art. In the late 1890s he was among the first representatives of the Secession in Hungary and later produced works in the impressionist, expressionist and art deco styles. His art was held in high esteem by his contemporaries as well as the critics and art historians of his time. The colourfulness of his pictures, his confident and forceful brushwork as well as ability to create a grand synthesis in form made Vaszary one of the most influential masters of his age both as an artist and a teacher.

The Hungarian National Gallery has always been at the vanguard of showcasing the oeuvre of János Vaszary. It mounted the first post-war exhibition of the painter’s collected works in 1961. The large-scale show of 2007 and the accompanying exhibition catalogue resulted in an unprecedentedly comprehensive research of his oeuvre. Then, in 2016, paintings were discovered in the museum’s collection that were unknown even to the expert curators.

After Vaszary’s death in 1939 his widow managed her late husband’s estate. The hundreds of paintings and graphic works were deposited in the Museum of Fine Arts and after the widow’s death, from 1942, the extensive material was documented and preserved by the museum. In 1957, with the establishment of the Hungarian National Gallery, the nineteenth- and twentieth-century fine arts material was transferred there from the Museum of Fine Arts. The two institutions were re-united in 2012 and plans were drawn up within the framework of the Liget Budapest Project to implement a new, modern museum restoration and storage building satisfying all professional needs. Moving the tremendous quantity of artworks posed challenges to all the staff members of the museum; the process lasted for years, required thorough preparation but at the same time was inspiring. It was during the preparations made for the big move that the inventorying of the complete material held in the National Gallery building was started. While drawing up the inventory, in 2016, two rolls of canvases, having been stored there for decades, were found in one of the rooms, each with twenty oil paintings by Vaszary. These works, which “lay hidden” in the museum’s own collection, proved to be entirely unknown to everybody – even the art historians had never come across them. There were no known reproductions made of them, not even during Vaszary’s lifetime, thus they must have entered the public collection directly from the master’s studio. Although there was some reference made to them in the transfer documentation, these forty works were omitted from the inventory of the institution during the transfer process for some reason that is now impossible to reconstruct.

It was obvious that such a sensational discovery was deserving of publicity. Vaszary’s paintings are exceptionally sought-after in the art trade and re also greatly admired by the public. Our exhibition presents the most beautiful and most exciting, duly restored twenty-four paintings of the recently found treasure. The canvases represent virtually every period of Vaszary’s oeuvre: from his early impressionistic pieces to his expressive compositions, from his art deco works in Paris to his Danube Promenade pictures and seaside scenes with a Mediterranean atmosphere. This material is supplemented by other Vaszary masterpieces from the museum’s collection and less known cardinal pieces from private collections thus far believed to have been missing. The exhibition will also include some sheets from the museum’s graphic art collection that are also among the less known pieces of Vaszary’s oeuvre.

Besides the exciting story of discovering the hidden treasure, the exhibition catalogue contains art history analyses of the recently found Vaszary pictures each linked to the relevant periods of Vaszary’s oeuvre.

The curator of the exhibition is art historian Mariann Gergely. 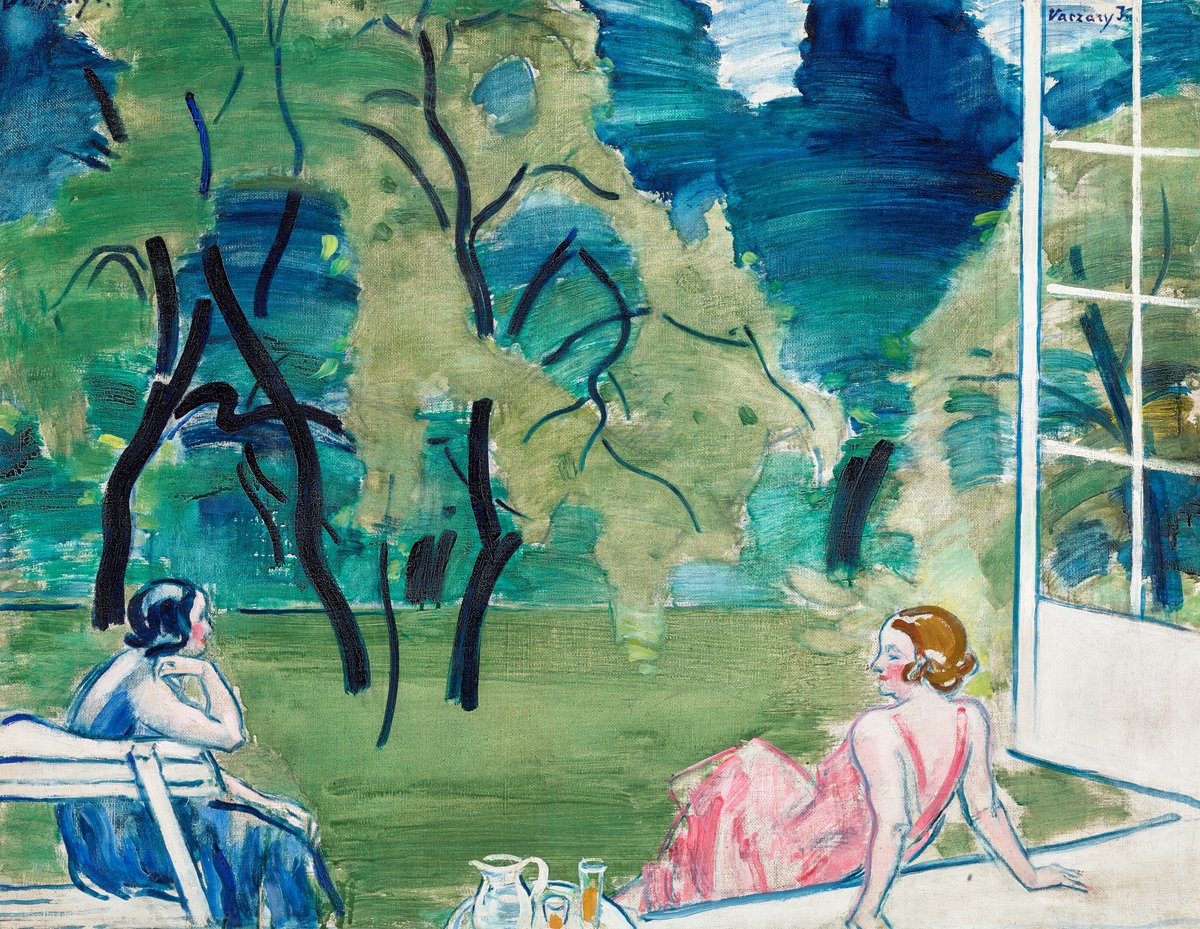 In the Park János Vaszary 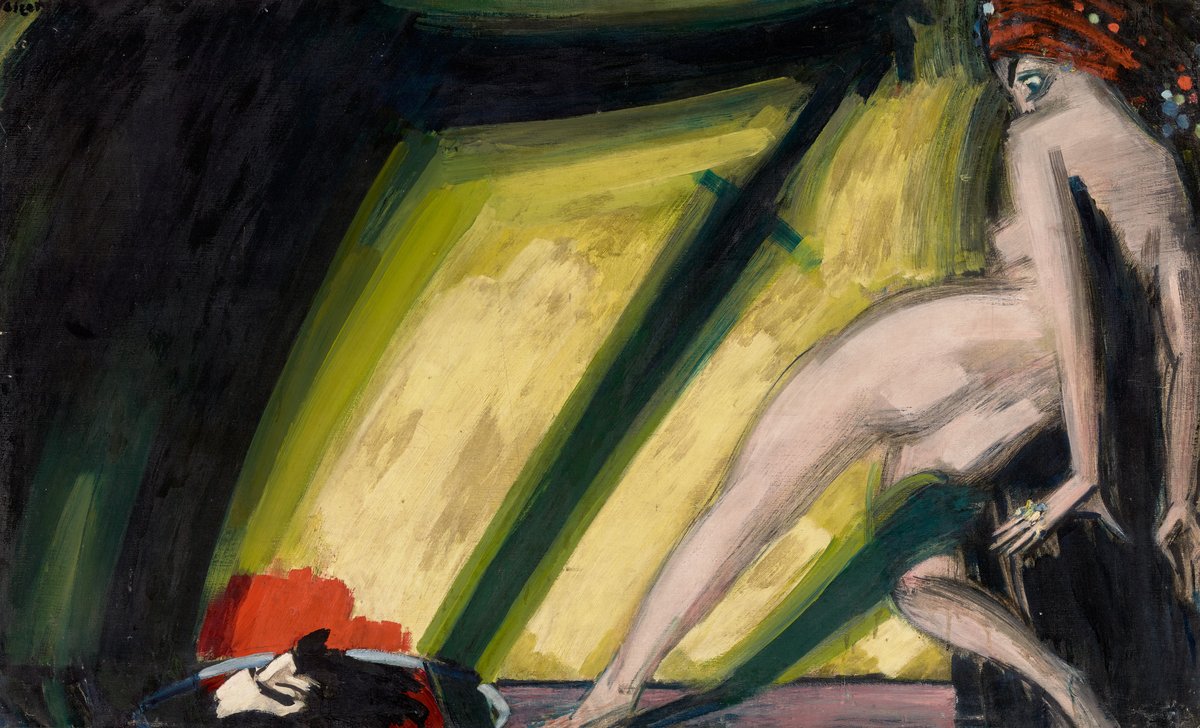 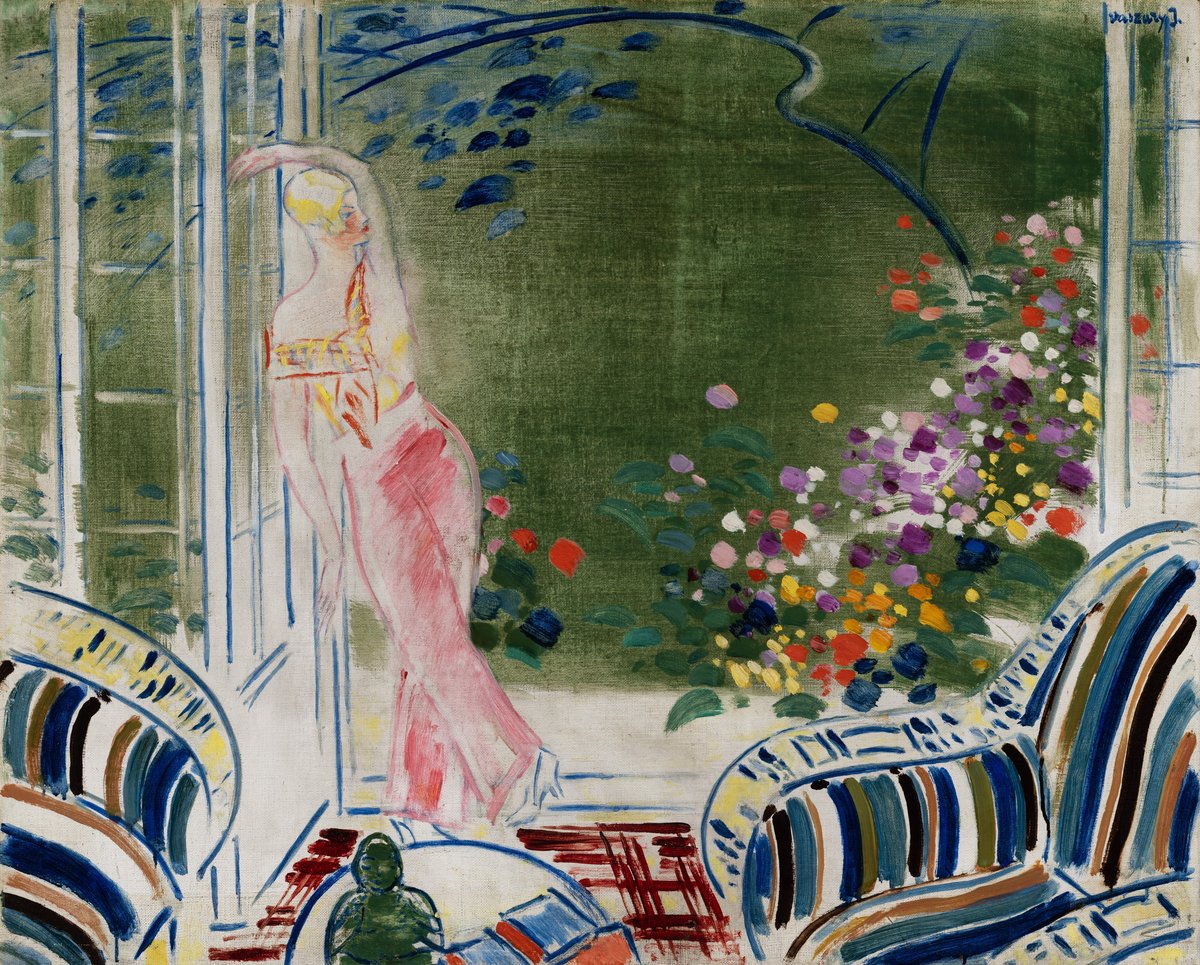 Woman in Red Pyjamas Standing on the Porch János Vaszary 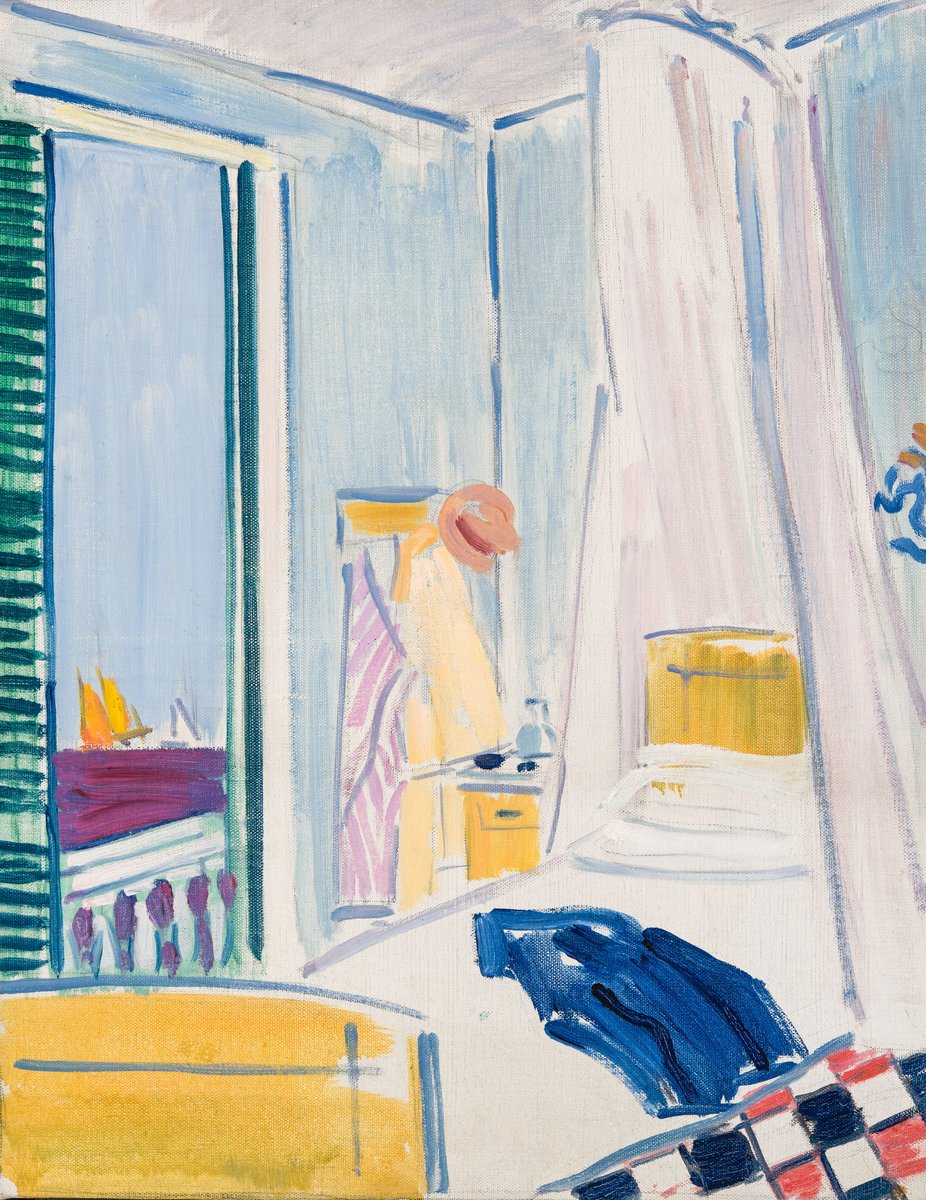 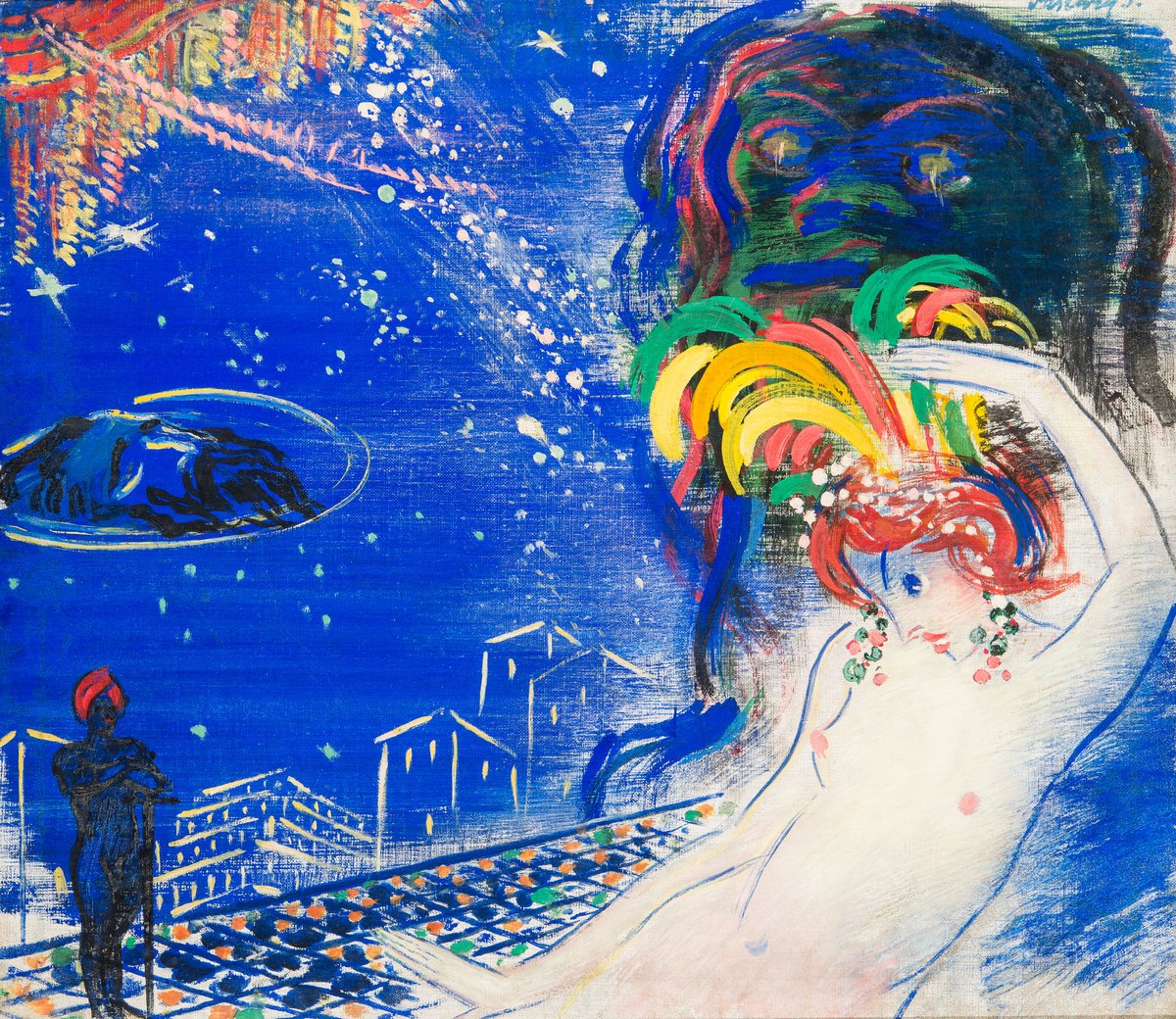 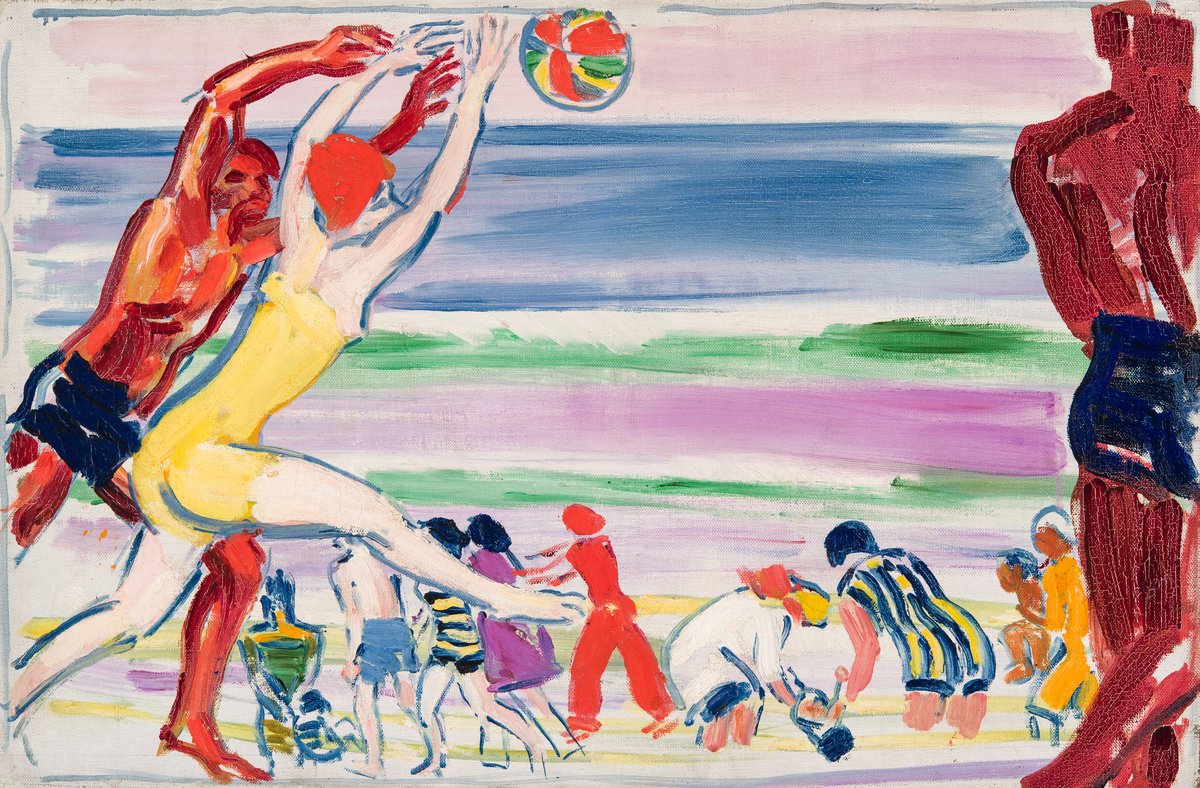 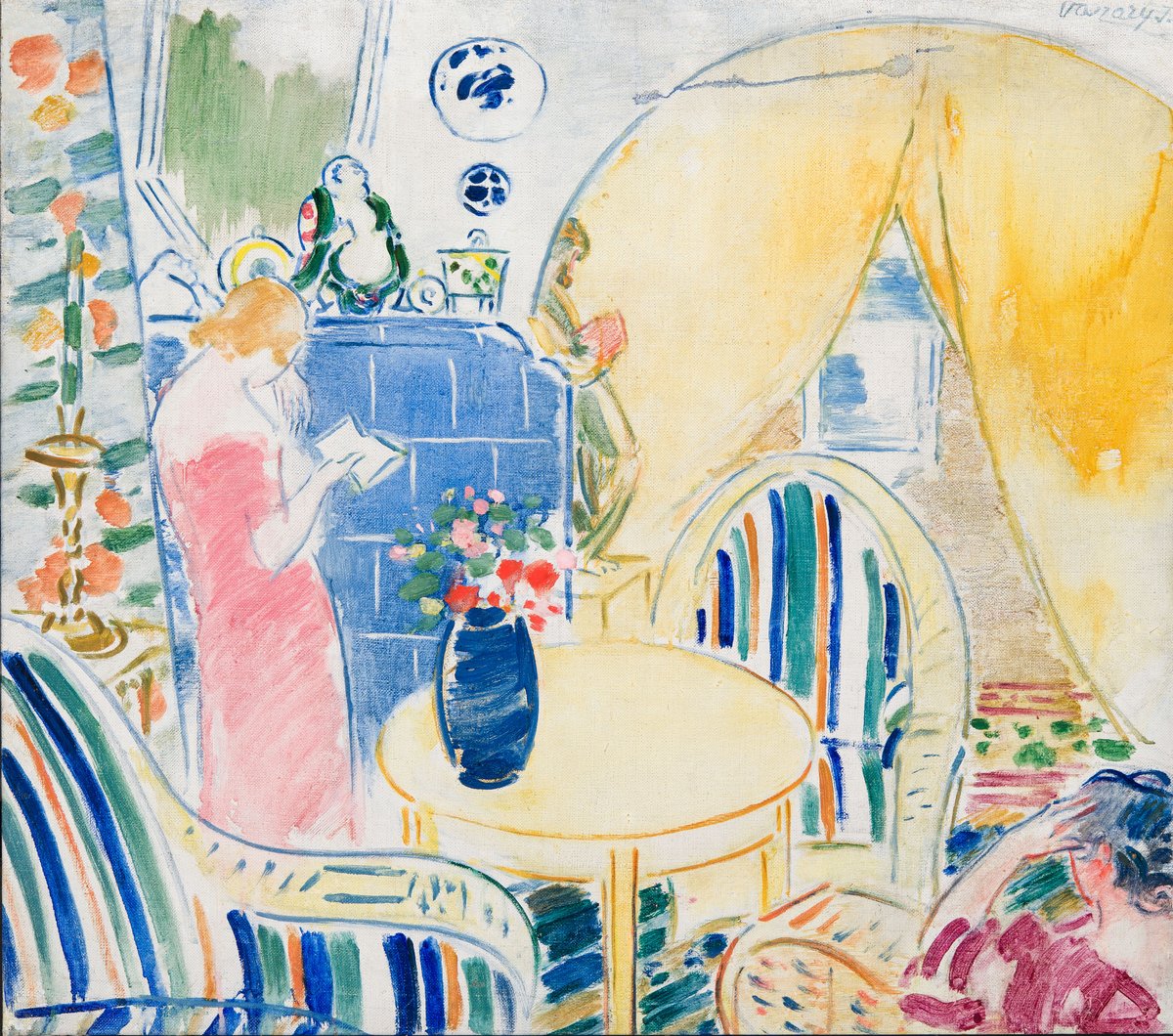 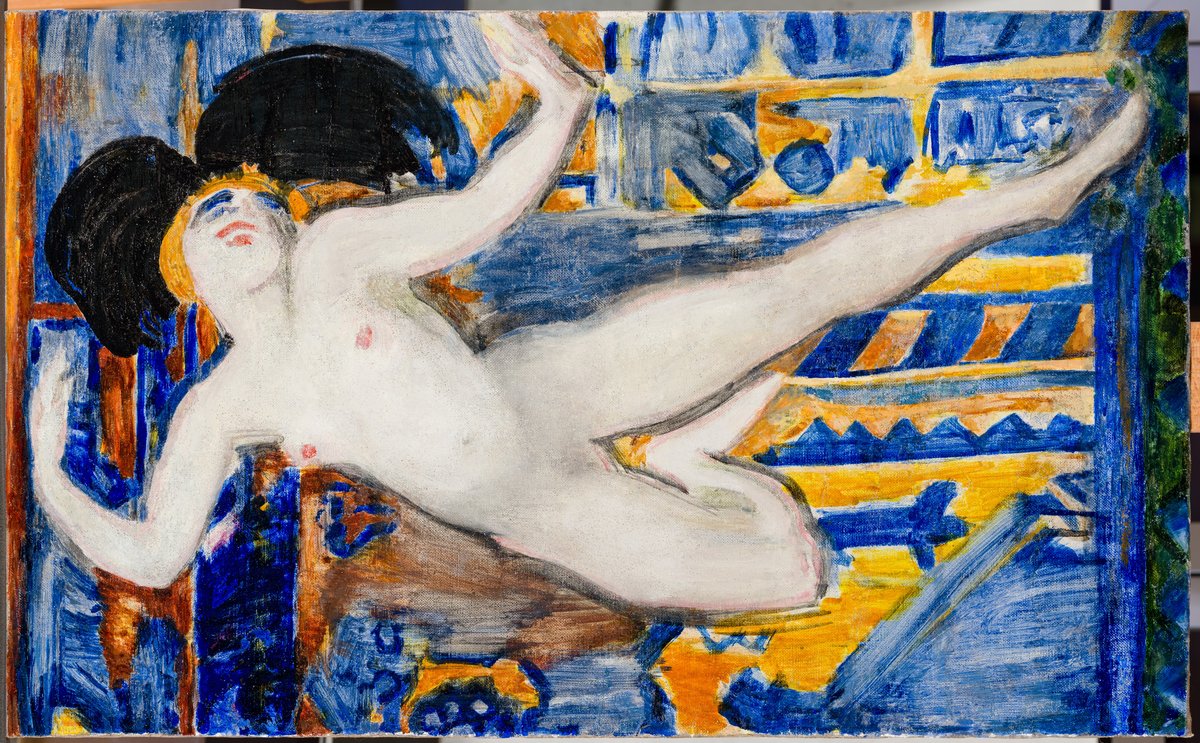 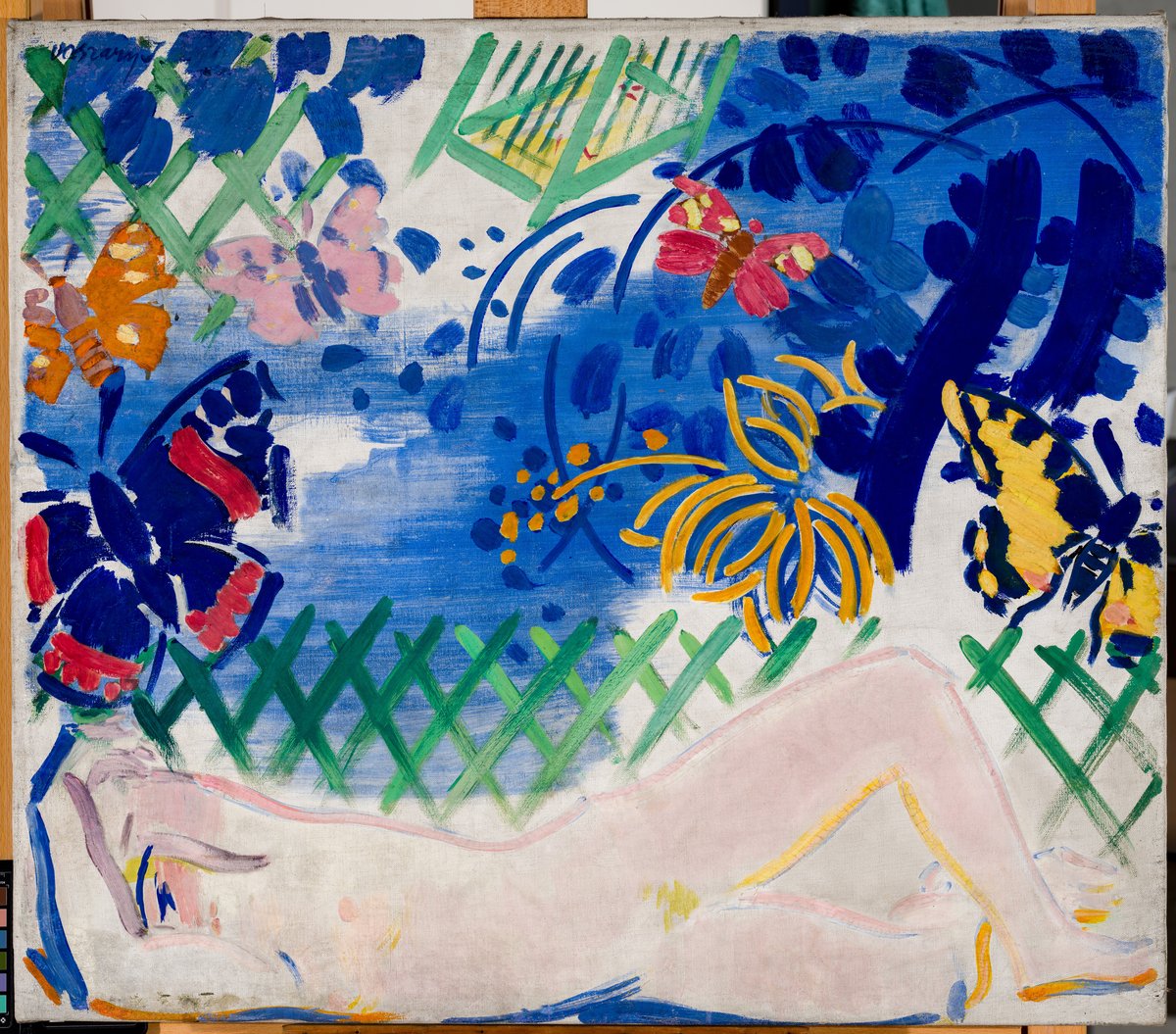 Nude in the Garden Before a Green Fence János Vaszary 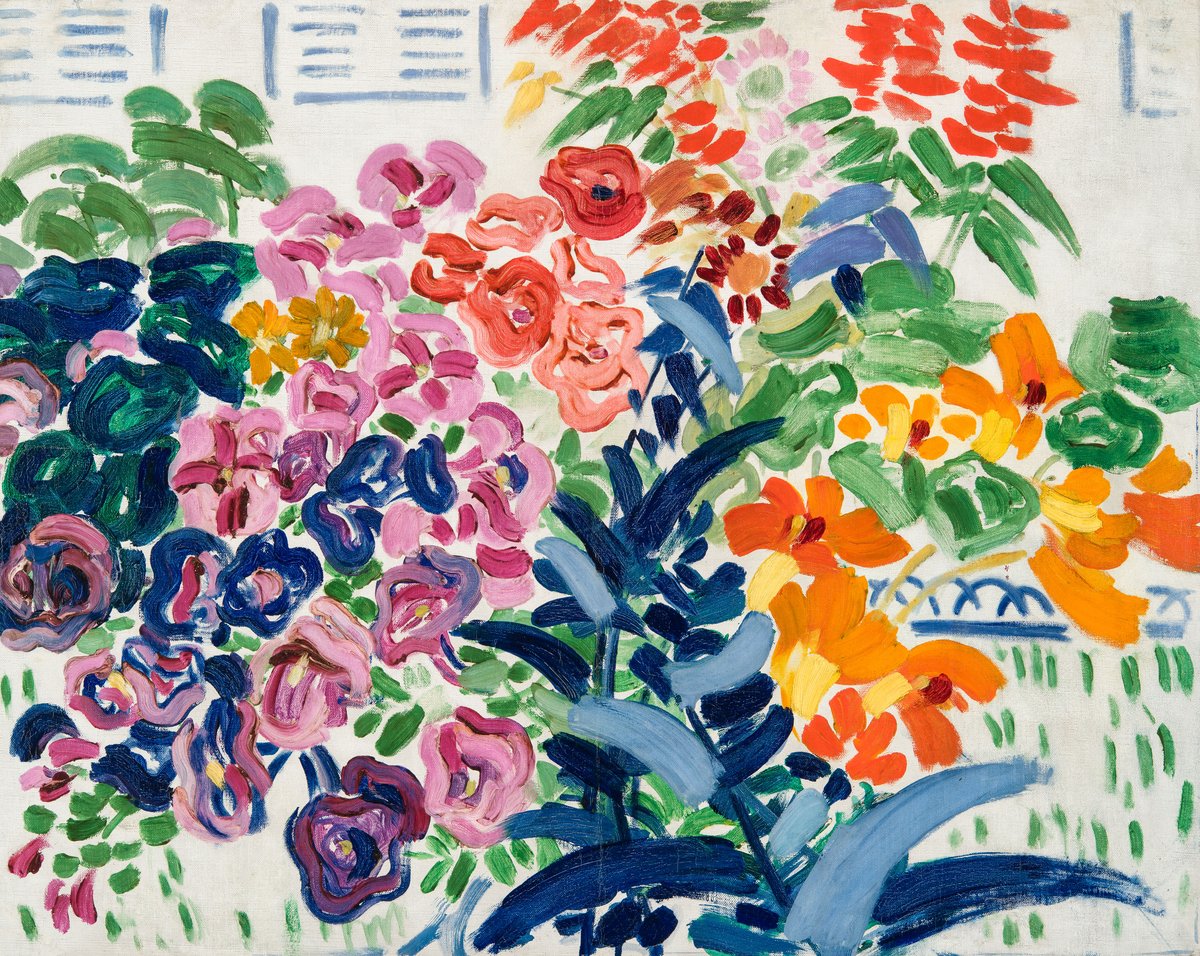 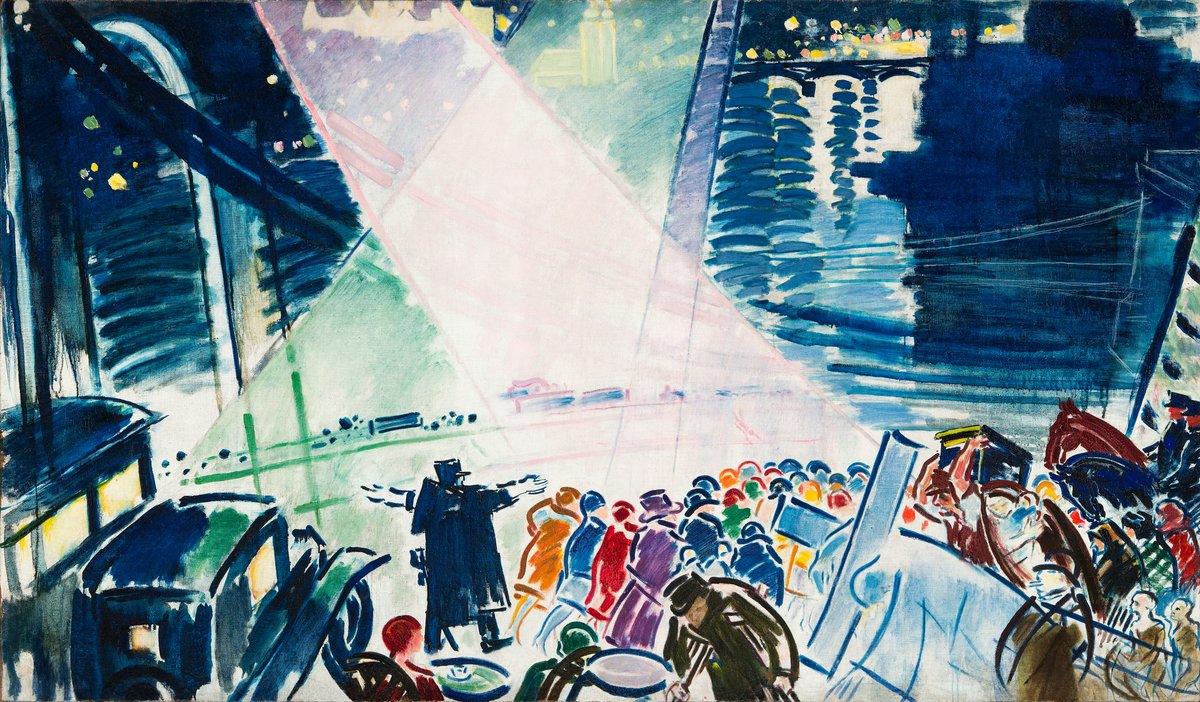 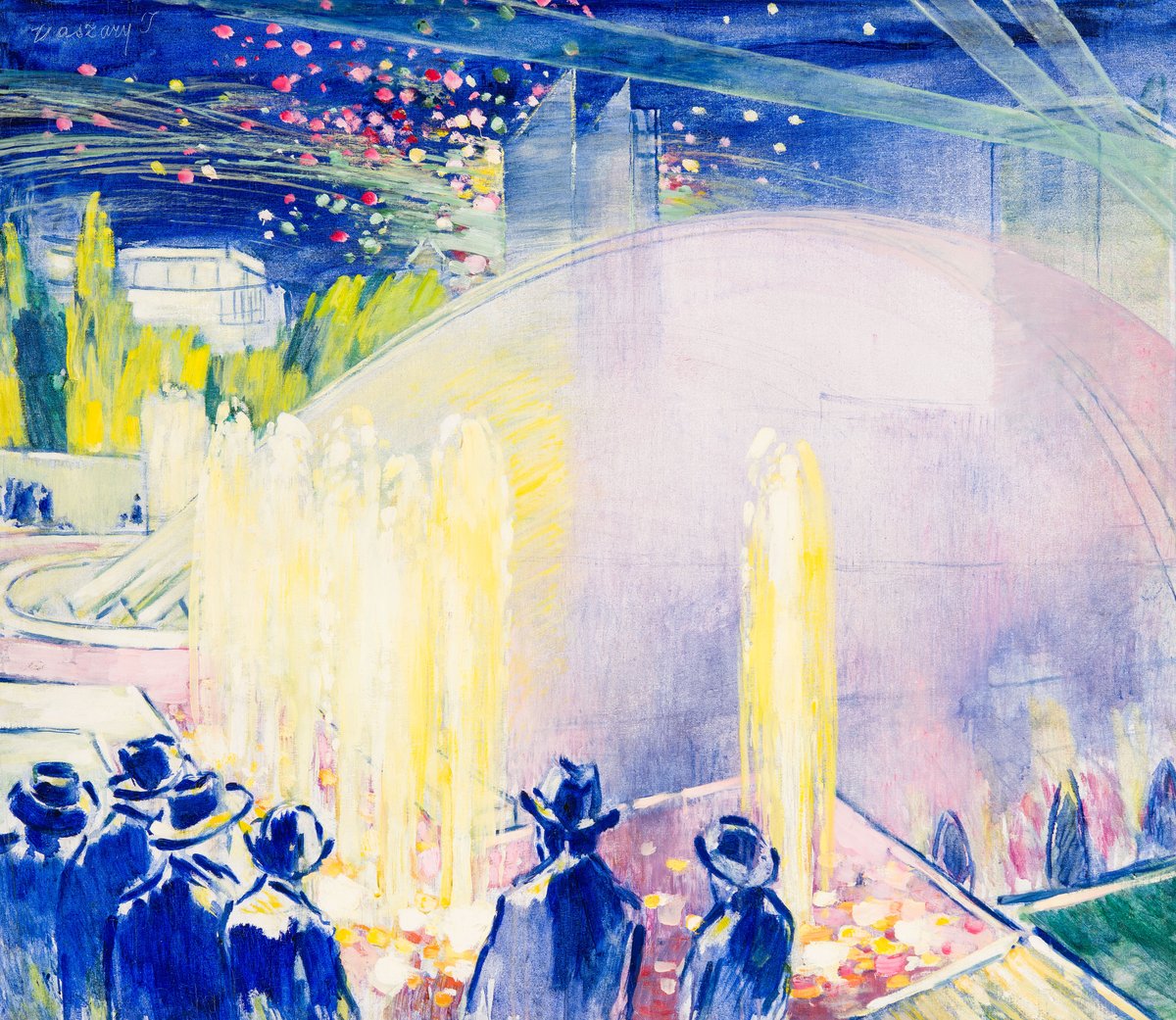 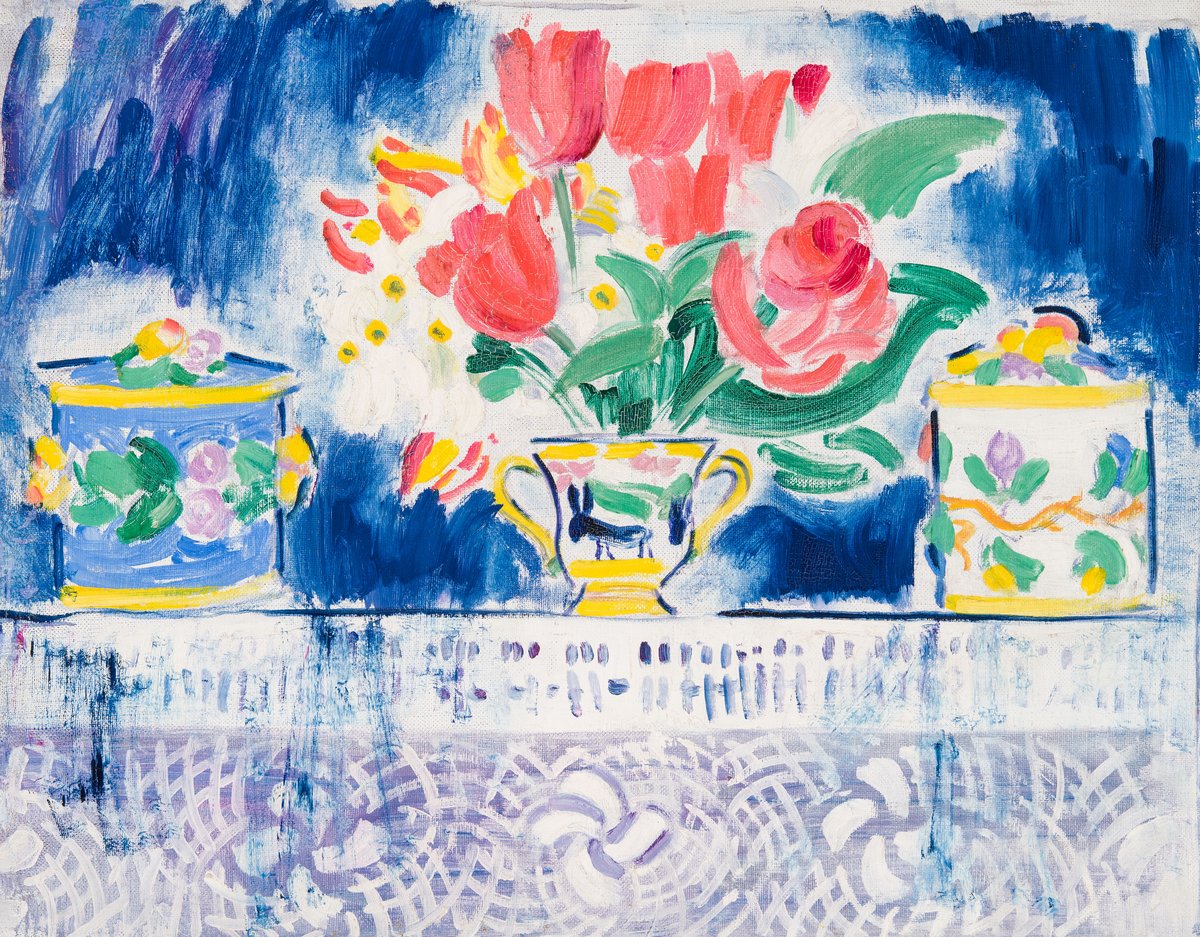 Tulips in a Vase János Vaszary

Vaszary’s technique became gradually more sophisticated. He indicated the stretches of beach that belonged to the hotels, chequered with sunshades and bathing cubicles, using no more than coloured dots and lines, with the occasional tremulous squares and blocks. The silhouettes of the rowers as they take to the water are counterbalanced by the swaying boats sketched with a single line. From the blue of the sky, through various shades of green, via purple and the yellow of the sand, the boundlessness of the sea is suggested in the horizontal breakers that loom one above the other. The sailors set off in their tiny boats to conquer the vast expanse of water, gazing awestruck at the spectacle of the multicoloured, churning sea. Vaszary had a contemplative artistic attitude, he was drawn to spectacle, decorativeness, finding the source of joy and beauty everywhere.

The banks of the Danube are to Budapest what the Eiffel Tower or the Place de la Concorde are to Paris: a picture postcard panorama that conjures up the atmosphere of the city. It was precisely this postcard quality that inspired Vaszary to give expression to ideas that he associated with Budapest. In his paintings, fashionable crowds stroll peacefully along the Danube promenade, taking in the view, passing the time. Scarcely any faces are visible: most of the people in the painting are sitting with their backs to the viewer, or turn away, not even paying attention to one another. They are extras in the scene, there to animate the cityscape. Nothing disturbs them from their everyday amusements. Absurdly, they are not even aware of the presence of the suffering Christ among them, bowed beneath the weight of the cross.

In the 1930s on Vaszary’s beach scenes reveal the artist’s goal of rendering temporality perceptible. The feat of making visible the sensation of motion is achieved in the stretching movements made by the figures in bathing costumes as they play with a ball on the beach; the leisurely progress of the boats as they sail side by side; and the various activities of the figures playing and splashing in the water. In the tumultuous beach scenes, there is always a standing male figure, his back resting against a wall, gazing around him as he exposes to view his sun-tanned, muscular physique.