Art in the 19th Century

From the Age of Reforms to the Turn of the Century

The re-organised permanent exhibition showcasing Hungarian fine art from 1810 to 1900 is displayed in the most impressive halls on the first floor of the museum’s main wing. The new exhibition comprising some 150 paintings, 40 sculptures, 40 medals, and 33 applied art objects presents the well-known masterpieces arranged according to a fresh concept, while visitors will also be able to see numerous works that had thus far been only rarely on display.

The nineteenth century is distinguished by the birth of national art and the emergence of the most important institutions of art, including museums, the academy, exhibitions, art prizes, as well as art criticism and art press. István Ferenczy, Pál Szinyei Merse, Miklós Izsó, Miklós Barabás and others are iconic figures of Hungarian national art, while their masterpieces such as the Little Shepherdess, Picnic in May, the Grieving Shepherd and the Romanian Family Heading for the Fair are examples of the collective Hungarian pictorial memory known to us all.

The rearranged exhibition introduces visitors to the era’s most important artists and art trends. The fourteen sections equally include chronological (Hungarian Art in the Beginning of the Nineteenth Century, Nation and Art), stylistical (Biedermeier, The Call of the East, Out in Nature, Naturalism), thematic (The Heroism of Modern Life, In Italian Lands, The Exotic and the Erotic) and genre-based (From Nature to Landscapes, The Golden Age of Portraits) units. A section devoted to cultural and institutional history, titled Arenas of Culture, occupies the middle hall as an exciting novelty of the show. It provides an overview of the art institutions that were established in Hungary in the nineteenth century and enabled the development of the country’s art life. The sections also contain units focusing on a prominent master  (for example, István Ferenczy, Károly Markó, Miklós Izsó, Miklós Barabás, Bertalan Székely, Károly Lotz, Pál Szinyei Merse and Alajos Stróbl).

Besides the paintings, sculptures and medals, the rearranged exhibition also displays furniture and ceramic objects, originating from the collections of the Museum of Applied Arts, Budapest and the Anna Zádor Foundation, among others. The period interiors purport to evoke the characteristic milieu of the era.

A significant group of artworks can be found in each of the two sections opening from the dome hall. Exhibited on one side are the prominent works of Hungarian historical painting with masterpieces of national romanticism that defined nineteenth-century Hungarian painting, such as the Women of Eger, The Mourning of László Hunyadi, The Baptism of Vajk and other outstanding historical paintings by Bertalan Székely, Viktor Madarász, Gyula Benczúr and Sándor Liezen-Mayer.

The first generation of Nagybánya artists

On the other side of the dome hall visitors can see representative artworks of plein air naturalism, marking the beginning of modernism: paintings by Simon Hollósy, István Csók, Béla Iványi Grünwald and Károly Ferenczy, artists who were all active in Munich and Nagybánya (today Baia Mare, Romania) at the end of the nineteenth century.

The last chapter in the narrative of nineteenth-century Hungarian art displayed in the permanent exhibitions on the first floor of the Hungarian National Gallery is the recently rearranged Munkácsy hall, titled Variations on Realism – from Munkácsy to Mednyánszky. 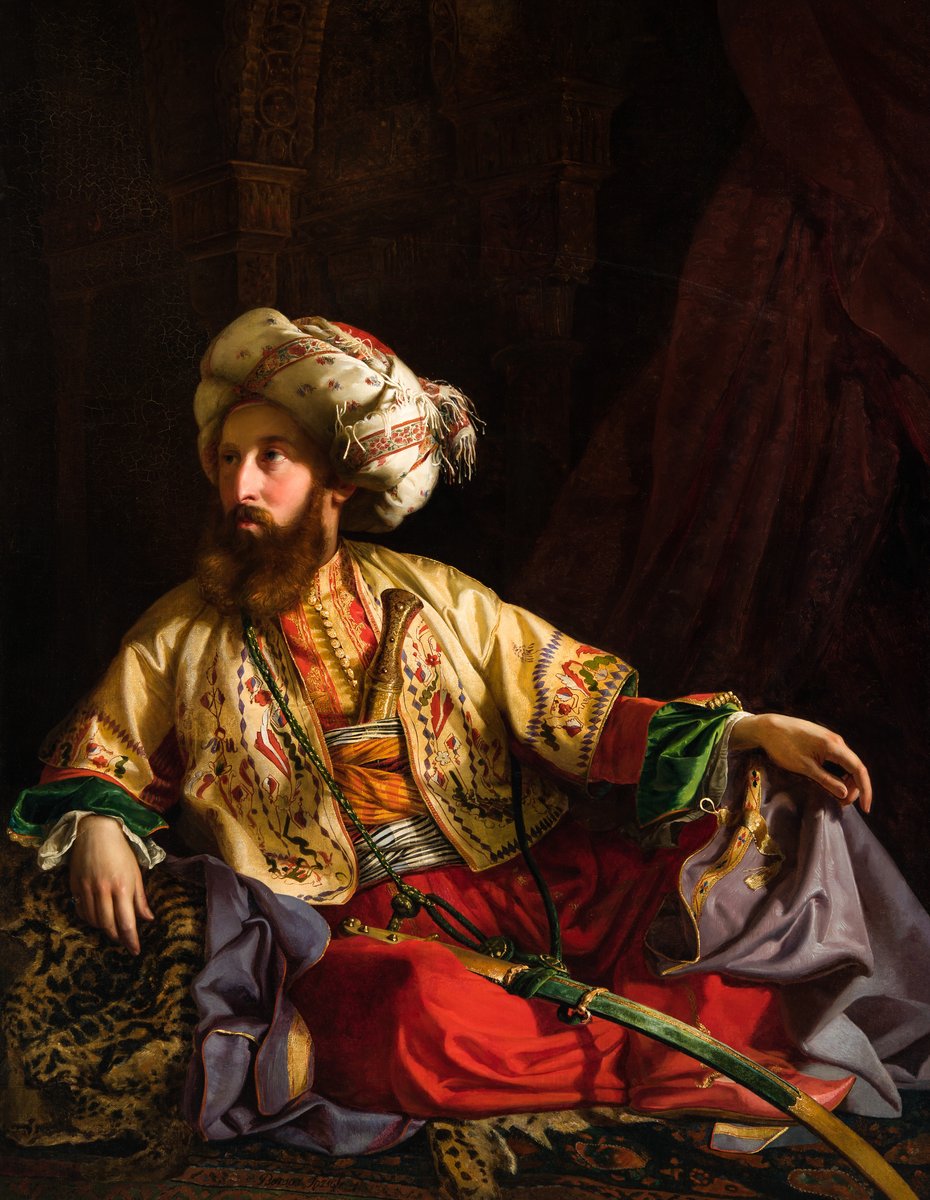 The Emir of Lebanon József Borsos 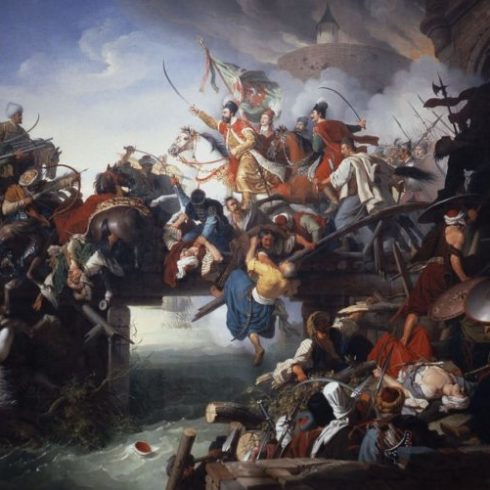 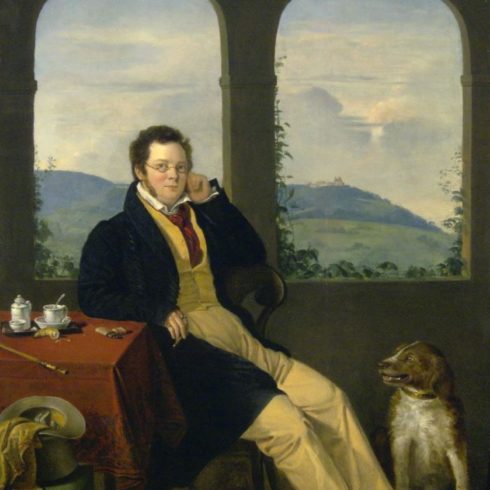 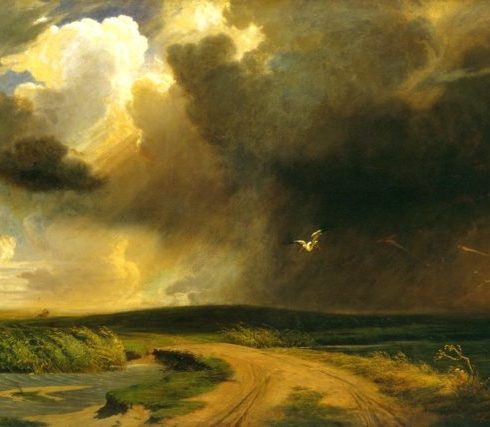 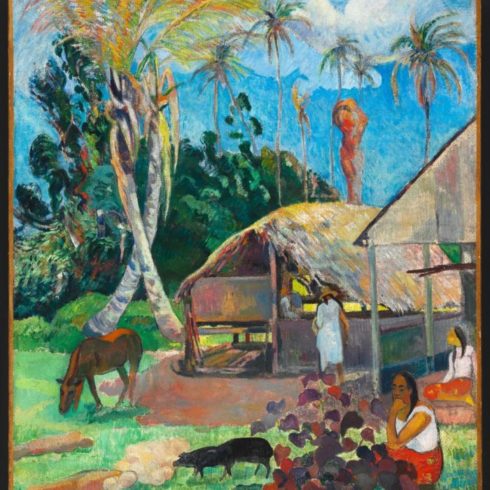 A whale of a time

Details of the tour 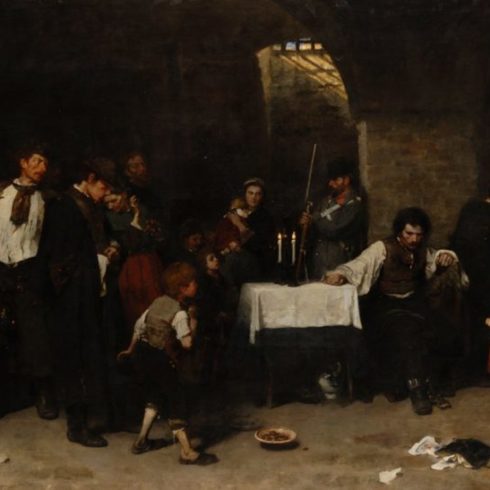 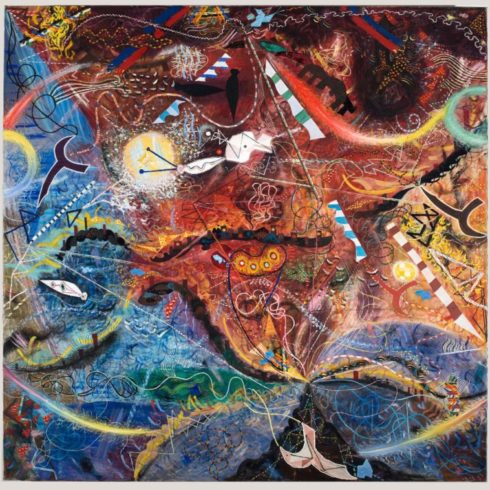 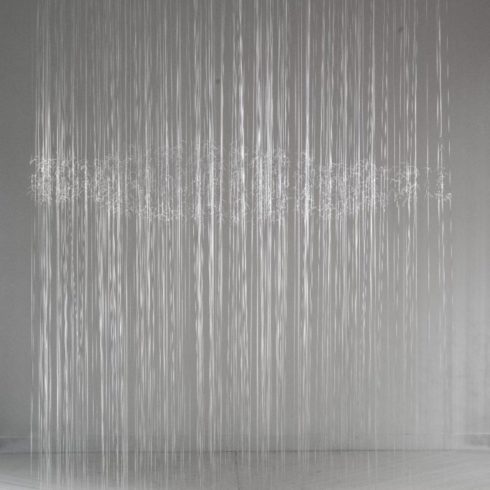 Details of the tour

This early masterpiece by Pál Szinyei Merse is a depiction of the artist’s wife, Zsófia Probstner, in the garden of their mansion in Jernye. The couple got married in 1873, after Szinyei painted the chief work of his oeuvre: Picnic in May. Lady in Violet is built on the complementary colour pair of violet and yellow, and green. It is interesting that unlike in Picnic in May, in this picture Szinyei virtually does not use any red, as it only appears in a tiny spot on the woman’s lips, and in the signature of a calligraphic quality, making the latter conspicuous.

The ruins of the castle of Visegrád, proclaiming the medieval grandeur of the Kingdom of Hungary, became a popular theme among Romantic landscape artists in the early 19th century. Antal Ligeti painted the castle hill and the Danube behind it from an unusual perspective, enlivening the blue of the river and the sky after the storm with dynamic forms and vivid colours. The historic ruins are thus made a natural part of the painterly landscape depiction.

In his monumental historical painting, Bertalan Székely virtually elevated the story of the women of Eger into a national ‘devotional’ image. When Eger was besieged by a seventy- thousand-strong Ottoman army on 29 September 1552, the castle only had two thousand defenders, among them many women and children, yet they managed to repulse the enemy. The role of women in this siege was highlighted by 19th-century historian Mihály Horváth in one of his publications. Székely captured the climax of the drama unfolding during the uneven struggle against the Ottomans.

Art in the 19th Century

Picnic in May thermo mug