The Hungarian National Gallery’s new cabinet exhibition showcases the art of one of the preeminent masters of Hungarian graphic art, Gyula Tichy. The eighty or so works, including graphic works and paintings selected from the museum’s collection, contain pieces that can rarely be seen by the public or are exhibited for the first time.

During his rather short life, Tichy, a painter and graphic artist, created one of the most special oeuvres of the early twentieth century. His painting, drawing, and graphic art were inspired by the masters of English and Viennese Secession, such as Aubrey Beardsley, Walter Crane, and Gustav Klimt. His works, distinguished by delicate draughtsmanship and a decorative rendition of the themes of symbolism, were soon met with success in his day. The museum’s collection was enriched significantly, with some fifty drawings, thanks to a generous donation in 2020, which furnishes the occasion for the thus far most comprehensive exhibition of Tichy’s unique oeuvre.

Gyula Tichy (1878, Rimaszombat [now, Rimavská Sobota, Slovakia] – 1920, Rozsnyó [now, Rožňava, Slovakia]) was one of the foremost masters of Hungarian graphic art, but his oeuvre has only drawn the attention of art historians and the public in recent years. In 2020, the Hungarian National Gallery’s Collection of Prints and Drawings had the opportunity to augment its material of the master’s works with pieces from a private collection. The significant acquisition – realised through the purchase of works from a renowned private collector and an extremely generous donation made by the collector – together with the centenary of the artist’s death provided the opportunity for the Gallery to showcase one of the most unique oeuvres of Hungarian symbolism; the opening date of the show had to be delayed to this autumn because of the Covid pandemic.

Tichy’s paintings, drawings and prints were inspired by the masters of English and Viennese Secession, such as Aubrey Beardsley, Walter Crane, and Gustav Klimt. His drawings, watercolours, linocuts, copper engravings, and tempera paintings, distinguished by delicate draughtsmanship and a decorative rendition of the themes of symbolism, were soon met with success in his day. He was a member of the KÉVE Artist Group from 1909, regularly exhibiting his works in Budapest, making illustrations, and having an album published. In order to sustain himself, he took on a post as an art teacher in Rozsnyó in 1909, from which time he lived there, while also maintaining his ties with the Budapest art scene.

Tichy took an active interest in physics and astronomy as well as the technological advances of his time, and he even started authoring a science-fiction novel. Due to his ever-deteriorating health, he turned his attention to drawing and printmaking. His linocuts made between 1908 and 1913 are possibly the most original sheets of graphic art at the turn of the century but equally diverse and enticing are his copper engravings and watercolours.

Tichy’s oeuvre addresses the modern notions and topical issues of his time (roles of women, contrast between urban and provincial life, subjects linked to the city, technological progress) in allegorical form and in the language of the Secession, defined by lines and ornamentation. 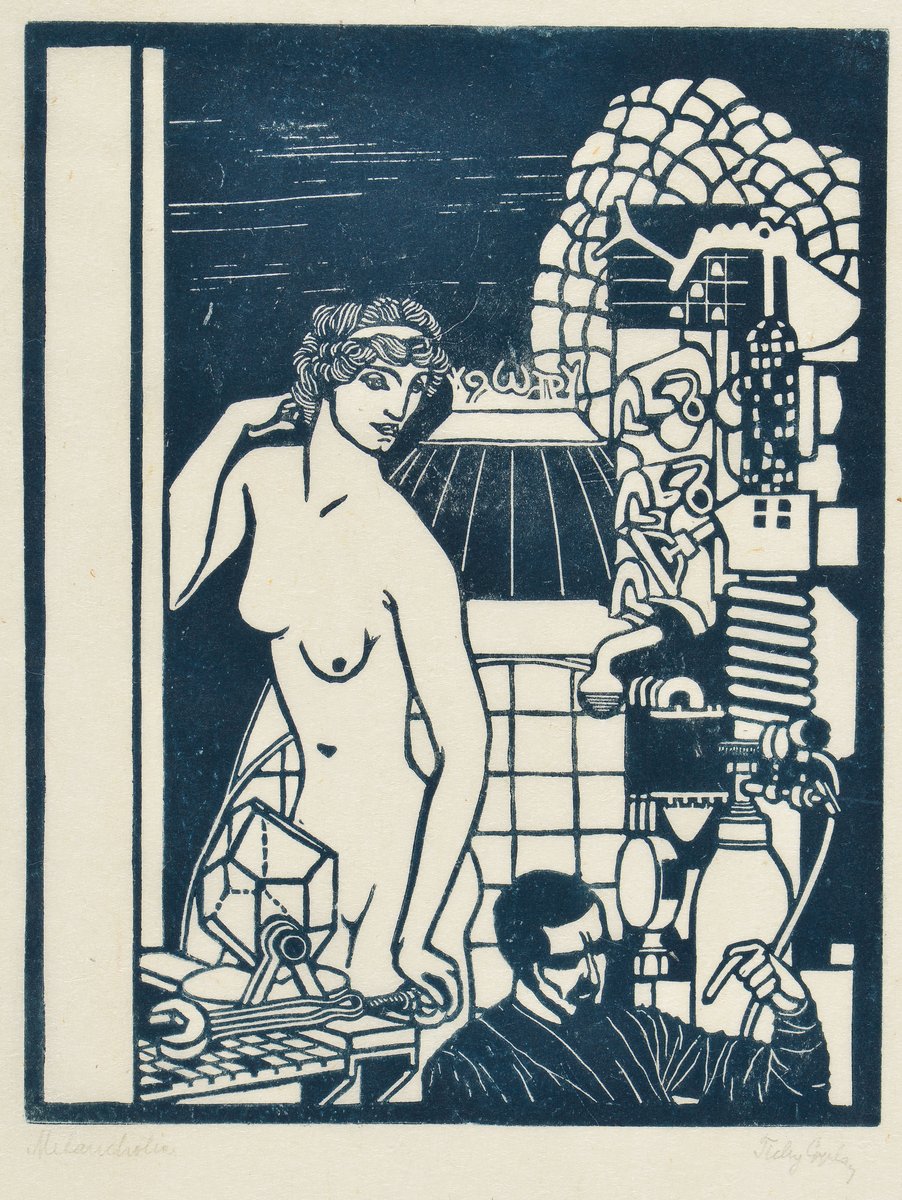 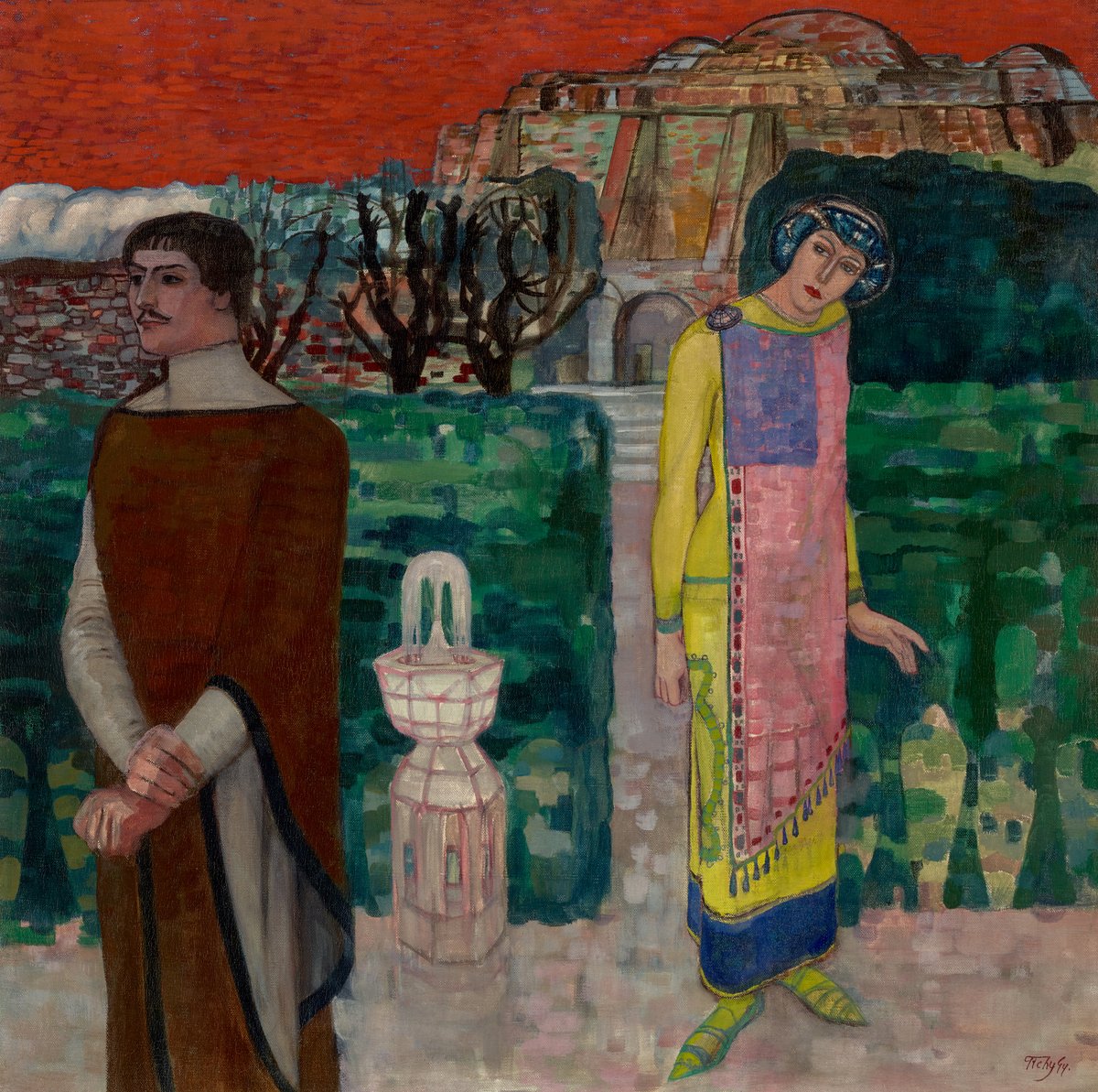 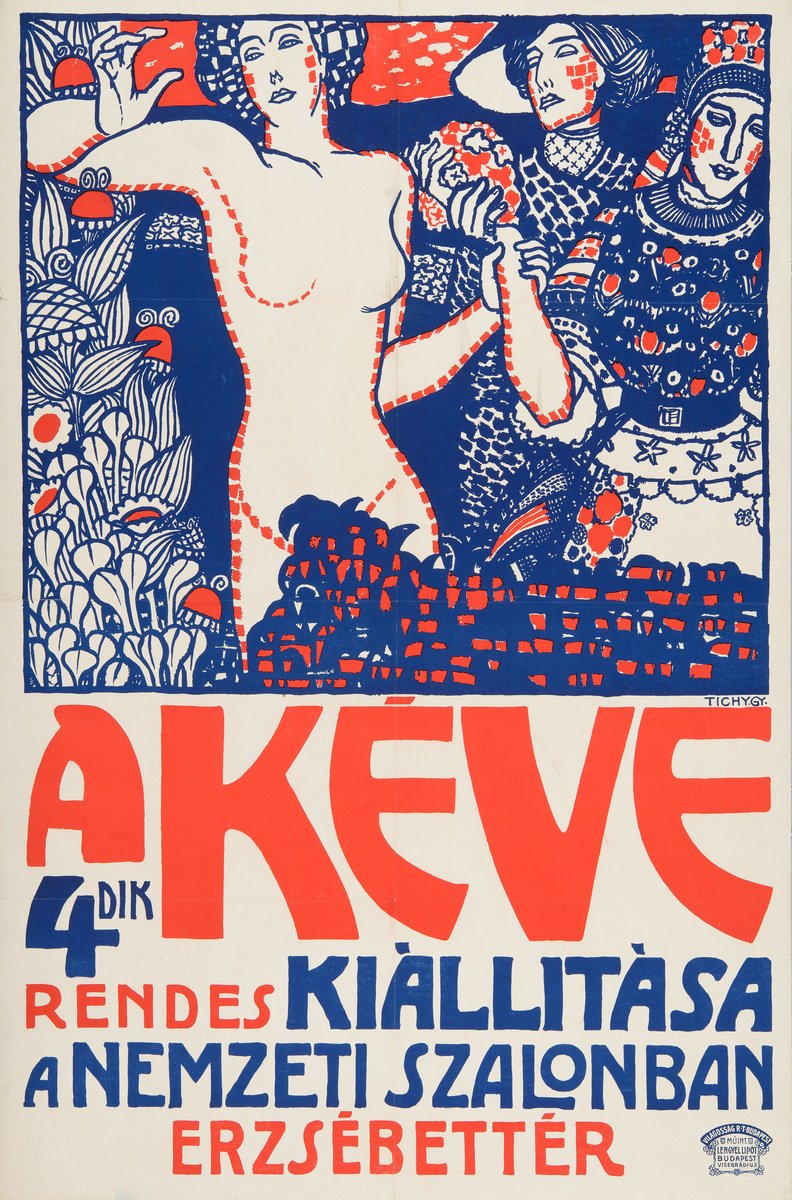 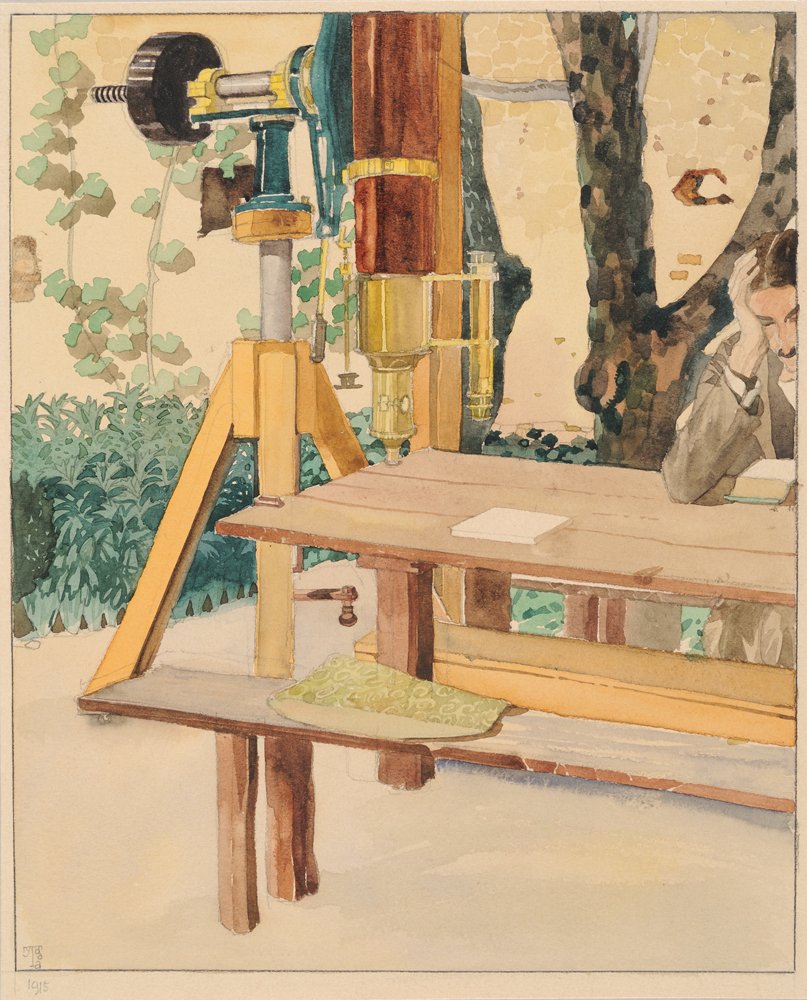 Kálmán with a Telescope Gyula Tichy 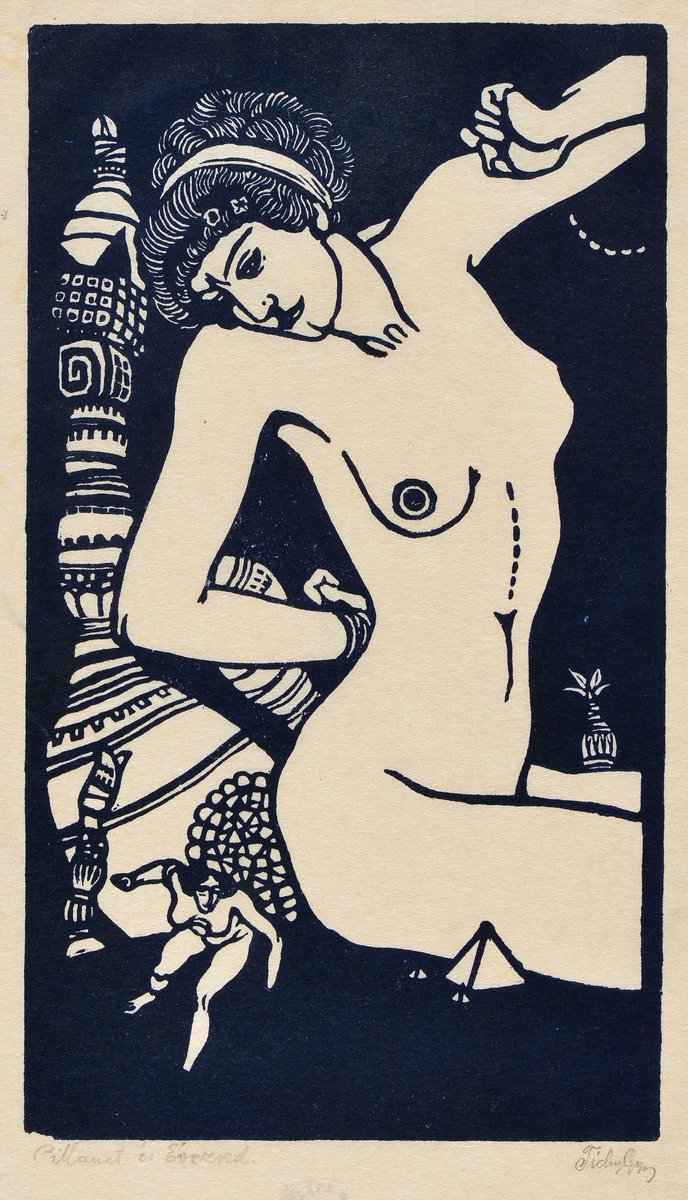 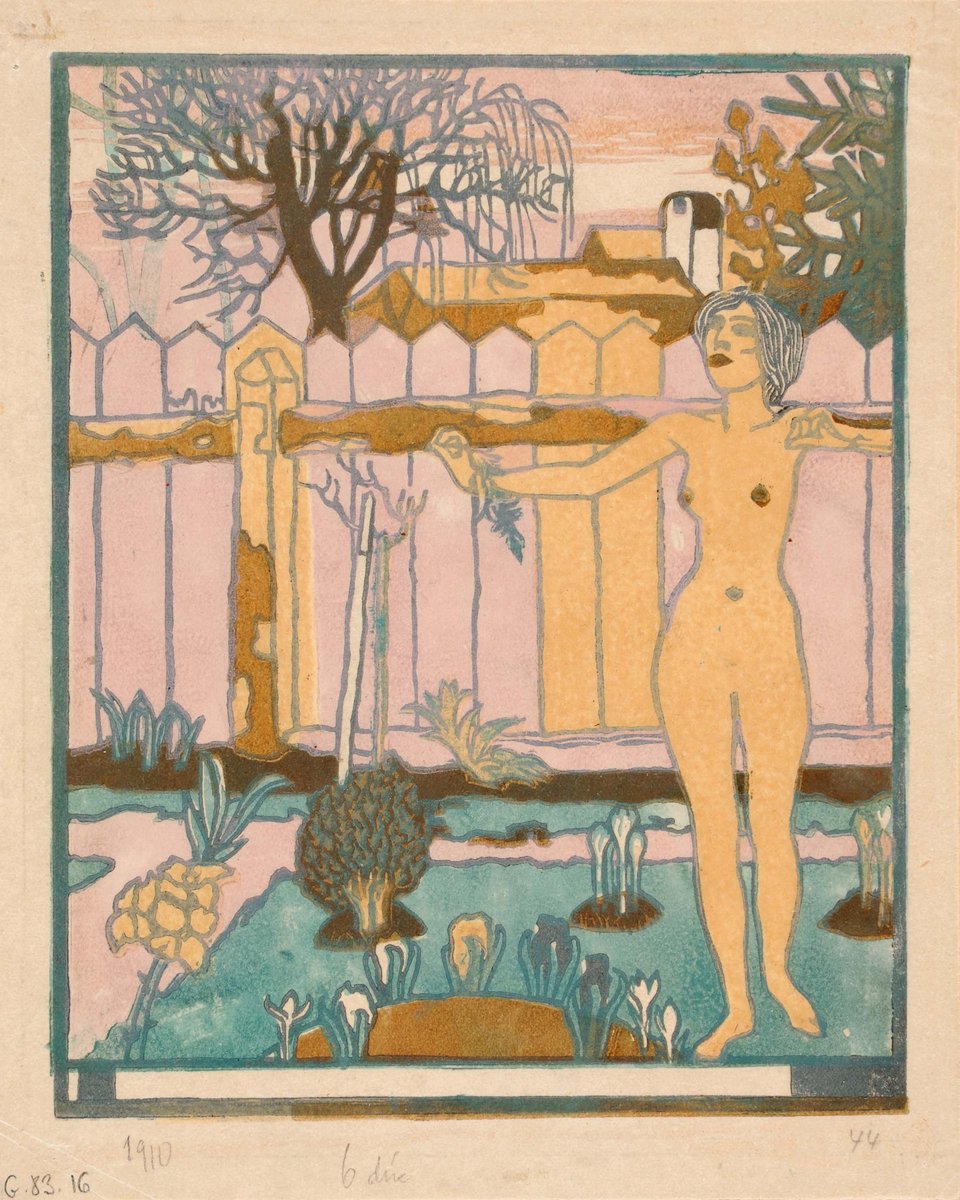 As a newly elected member of the Society of Hungarian Fine and Applied Artists (KÉVE), Gyula Tichy participated in his first KÉVE exhibition in November 1909, even designing the poster for the exhibition. In keeping with traditional art exhibition posters, he depicts the moment of artistic creation. The artist – Tichy himself – appears in the shadow at the bottom of the poster in the act of drawing, while the customary naked female figure – here his model – sits in a stiff, mannered pose in a patterned armchair, watching with curiosity as the work takes shape. As a concession to the demands of the genre, Tichy chose a vibrant red underprint as a way of attracting attention. The inscription, which reads “So the hand makes a move…” appears several times in Aladár Bálint’s prefatory note to the album Tales of an Ink Bottle, which was compiled at the same time. It also represents a familiar concept in that period: the line committed to paper is the first embodiment of the artist’s idea.

The painting Dame Queen, my sister dear illustrates a scene from János Arany’s ballad Klára Zách, which tells the story of the rape of the daughter of Hungarian nobleman Felicián Zách, the revenge sworn by Zách, and the subsequent bloodthirsty retribution against his family. The ballad was written in 1855, when contemporary audiences interpreted the tragedy of Felicán Zách as a reference to Hungary’s failed War of Independence in 1848–1849. Rather than the dramatic events themselves, however, Tichy depicts their antecedents. In the opening stanzas of the ballad, Elizabeth of Poland, wife of the Hungarian king Charles Robert, is in conversation with her brother Casimir. Addressing her as ‘Dame Queen, my sister dear’, Casimir entreats Elizabeth to allow him to seduce her lady-in-waiting, Klára. In Tichy’s apparently innocent medieval scene, Elizabeth and Casimir are accompanied by two ladies-in-waiting; Casimir gazes at Klára, while his horrified sister refuses his request. Tichy was fascinated by this scene in the ballad and painted three versions of it.

Dürer’s Melancolia exerted a huge influence on Tichy. According to the sixteenth-century German artist’s personal perception, a melancholic temperament was a trait of the creative artist. Tichy produced several versions of the copper engraving, creating modern “paraphrases”. “The principal figure has been transposed into the modern world; instead of a pair of compasses she holds a micrometer in her hand; before her is my own favourite electromagnet with a mysterious crystal exposed to its influence; in the sky are an aeroplane and integral symbols, with electric battery lamps scattered over the ground …” he wrote in 1918. The sketch was originally drawn in pen and ink; Kálmán produced the copper engraving, and the work was shown in 1916 in a joint exhibition in the Guild of Saint George.