The Hungarian National Gallery, Budapest presents a chamber exhibition to mark the centennial of Ilka Gedő’s birth. The selection comprises about fifty works, mainly from the artist’s early period. Ilka Gedő belonged among those special, lonely Hungarian artists with a unique creative method who did not affiliate themselves to traditional avant-garde trends. The disarming sincerity coupled with introspective focus in her self portraits makes her work unrivalled in European graphic art. Her illustrations can be found in the most prominent international collections, including the Albertina in Vienna, the British Museum in London, the Metropolitan Museum in New York, and in the Yad Vashem Art Museum in Jerusalem.

From her childhood, Ilka Gedő drew regularly and continuously. She even continued to draw in 1944, when locked in the Budapest Ghetto, since, as she said, “the concept of life remains valid as long as art is possible”. Her ghetto drawings are documents and reports from this living hell. They capture the most profound tragedy, human vulnerability and humiliation, with delicate contours, and implicitly convey the horrors people went through. The majority of the exhibited works are Ilka Gedő’s self-portraits, produced from a young age and even in the ghetto, and from 1946 evolving into her most important subject. These works display expressive modelling fraught with tension and, with merciless honesty, depict an artist amidst doubts, someone who does not know what the objective is of the “mind-numbing concentration and exertion required to commit the model to paper”. Ilka Gedő’s introspective focus and ascetic repetition stands almost without comparison in European graphic art. Her husband, Endre Bíró, expressed the burden of an artist’s loneliness with the following words: “One morning, before I set off and she was sitting before a primed canvas, she spoke in an extraordinarily expressive way about the eerie freedom that such a white square represents. It is there and she can paint on it what she likes. Nothing controls her but she herself.”

Between 1947 and 1949 Ilka Gedő was looking for a way out in her art. During this time, she made large-scale table drawings, in which this mundane piece of furniture gave her the opportunity to experiment with different factures and surfaces. These sheets depicting the life of an object are of similar significance in the history art as the works of the great graphic artists at the turn of the century. This approach of working in series and approaching an artistic problem from different viewpoints is manifest in her drawings produced in the Ganz factory on Margaret Boulevard, Budapest. These snapshots recorded in an entirely new environment show schematic figures, and without the artist’s intention of any kind of social criticism, their mood is incredibly sad.

Ilka Gedő did not accept the alternative “we do not depict but create” approach espoused by Lajos Szabó’s circle, and found no answer to the ailing question of “why does modern art exclude depiction?”. Consequently, she interrupted her artistic career and gave up drawing in 1949. However, she wrote: “this sudden stand-still did not mean my love of painting came to an end.” She translated Goethe’s Theory of Colours, while pursuing extensive studies in art history and colour theory. She made colour samples on which she analysed the grades of a colour and the relationship between colours, and even gave them names (Cheerful, Languid, Forced levity, etc.). The present exhibition includes a selection from her colour samples, which practically prepared the way for her painting period. In 1964 she made special portraits and abstract caricatures of her friends in pastel. These are “internal maps” of the depicted people, while also documenting Ilka Gedő starting her career anew. Some months later she began to paint again, creating a special artistic world of her own.

The exhibition contains about fifty drawings that were donated to the Contemporary Collection of the Hungarian National Gallery by the artist’s sons, Dr. Dávid Bíró and Dániel Bíró, and help visitors to form a comprehensive picture of Ilka Gedő’s graphic oeuvre.

The exhibition can be visited with a ticket exchanged for the permanent exhibitions.

The catalogue for the exhibition “… Half Picture, Half Veil …” Works on Paper by Ilka Gedő (1921–1985) can be purchased in the MúzeumShop and online from the MúzeumShop webpage.

Works preserved in a public collection 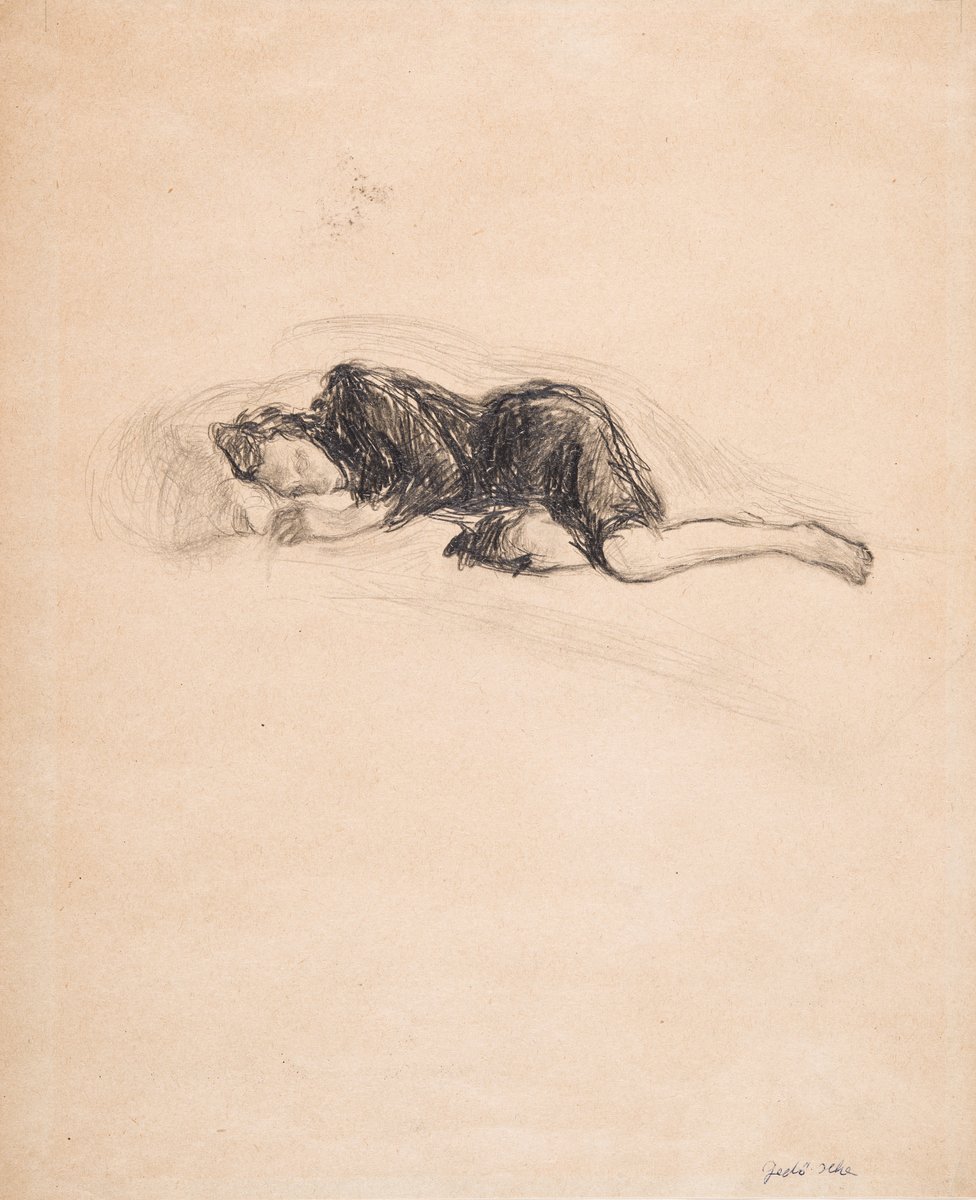 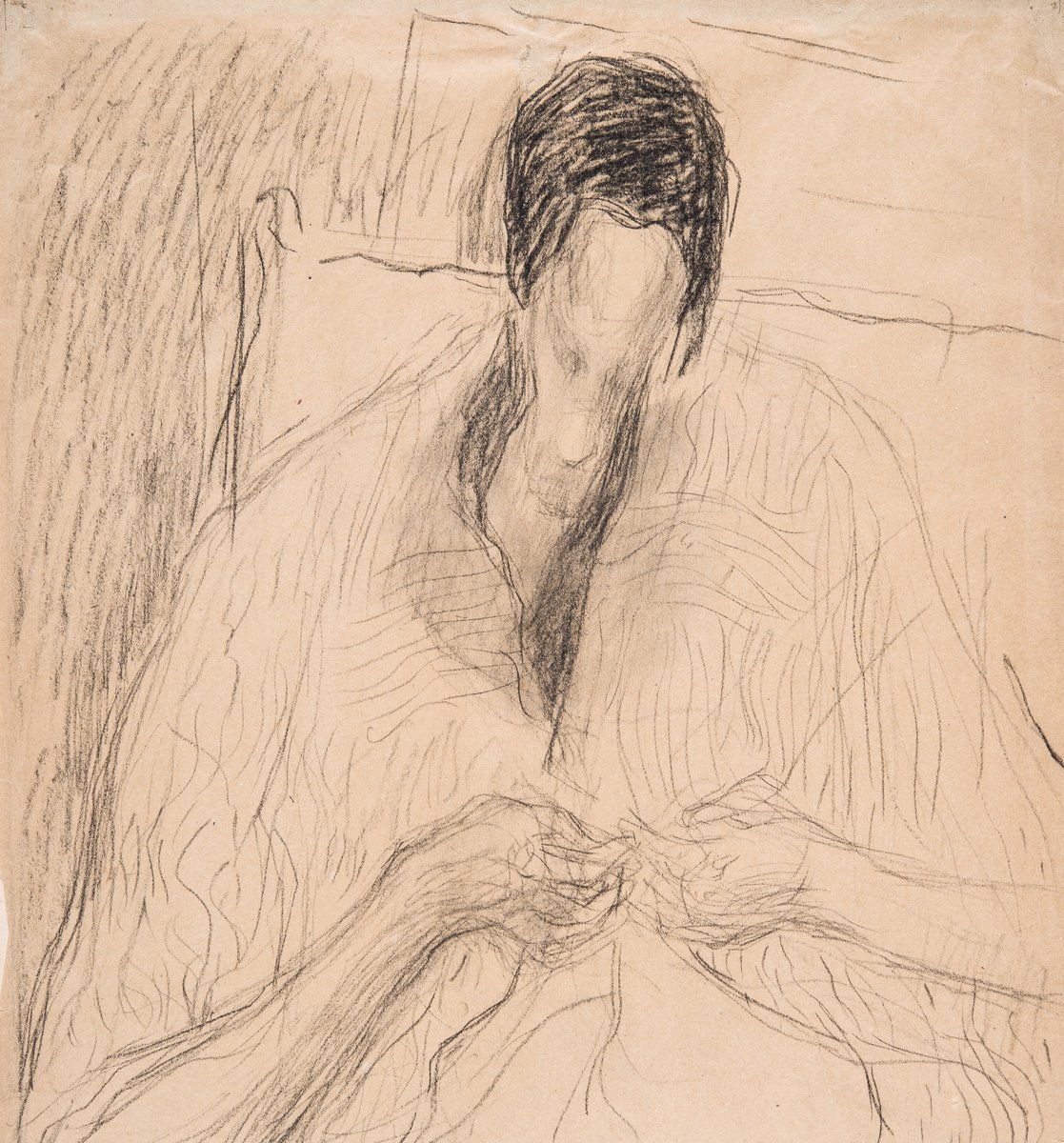 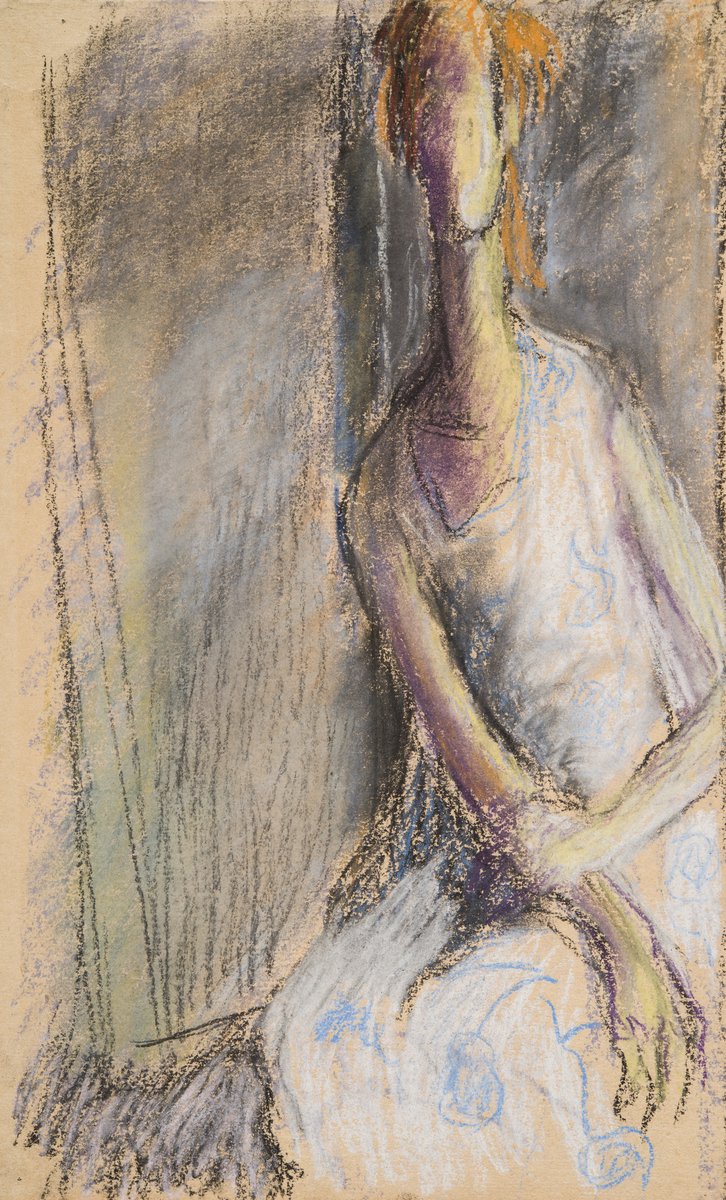 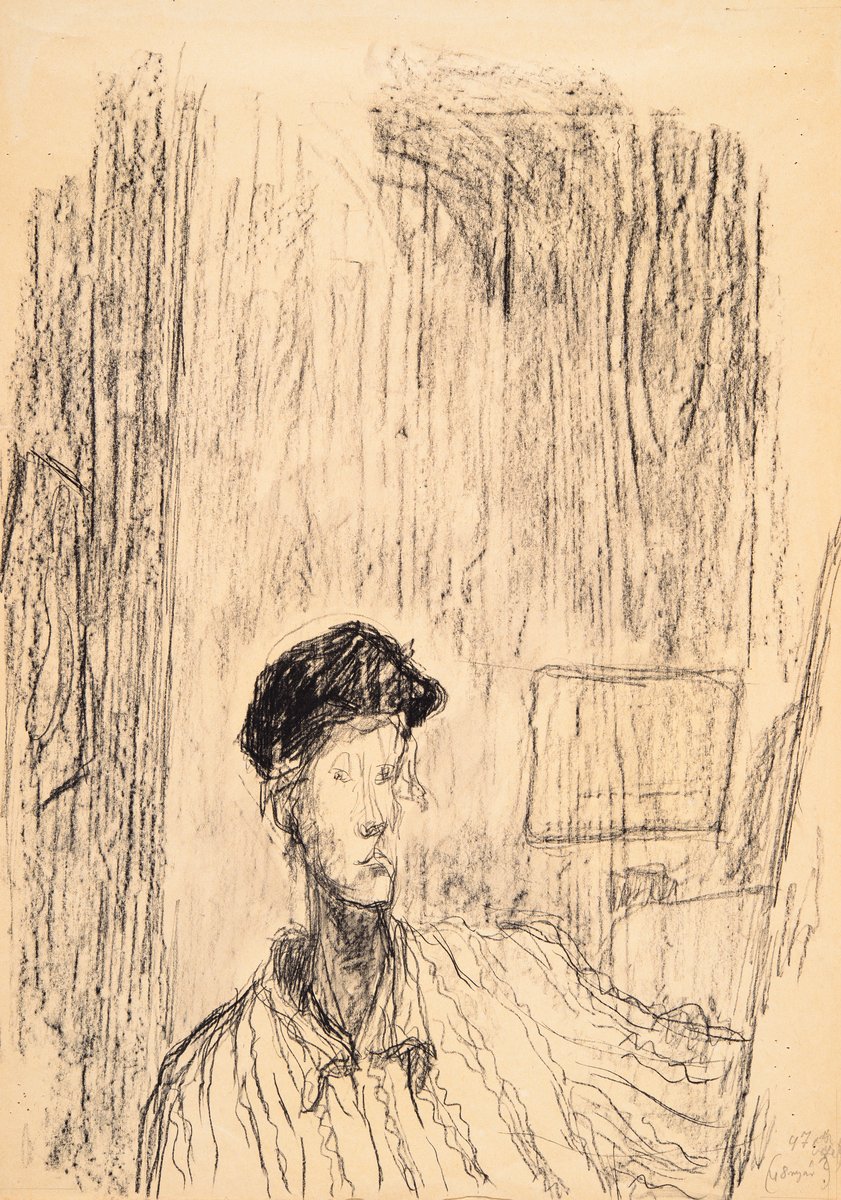 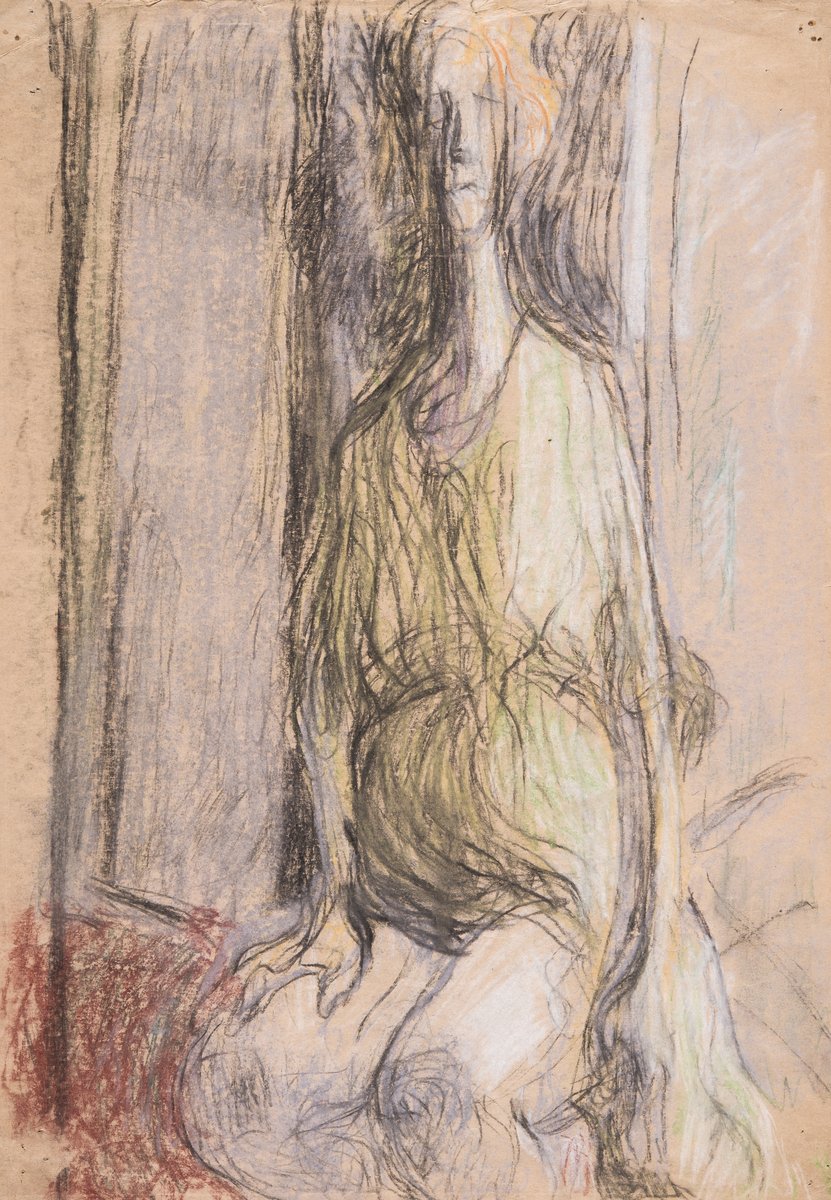 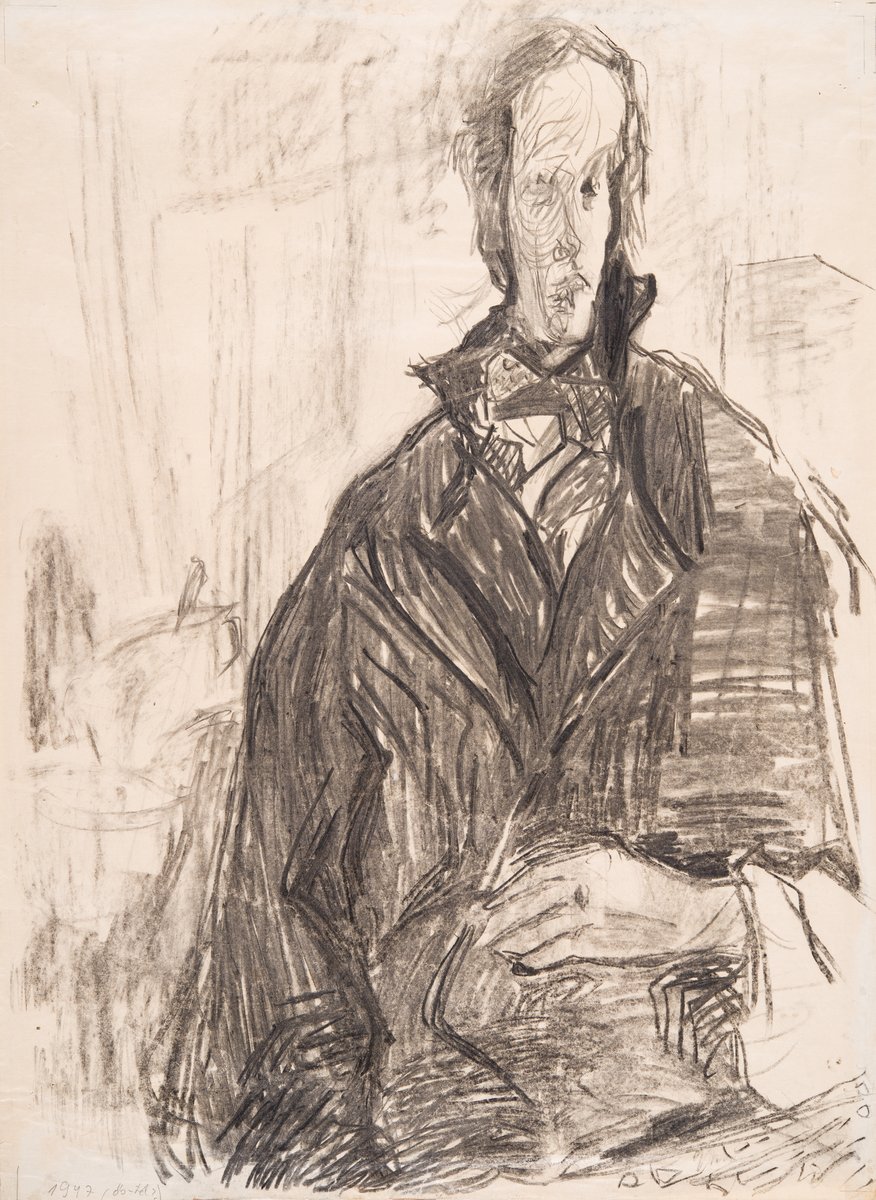 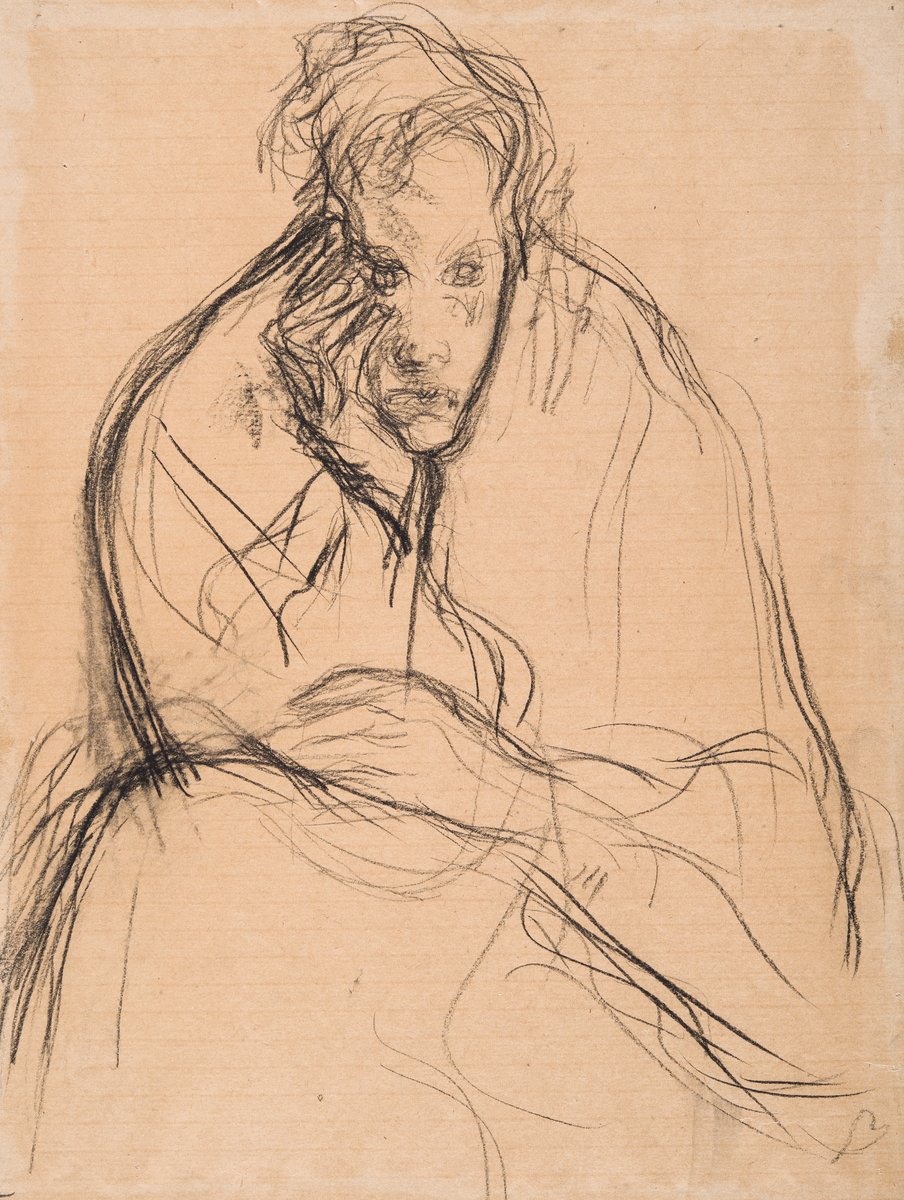 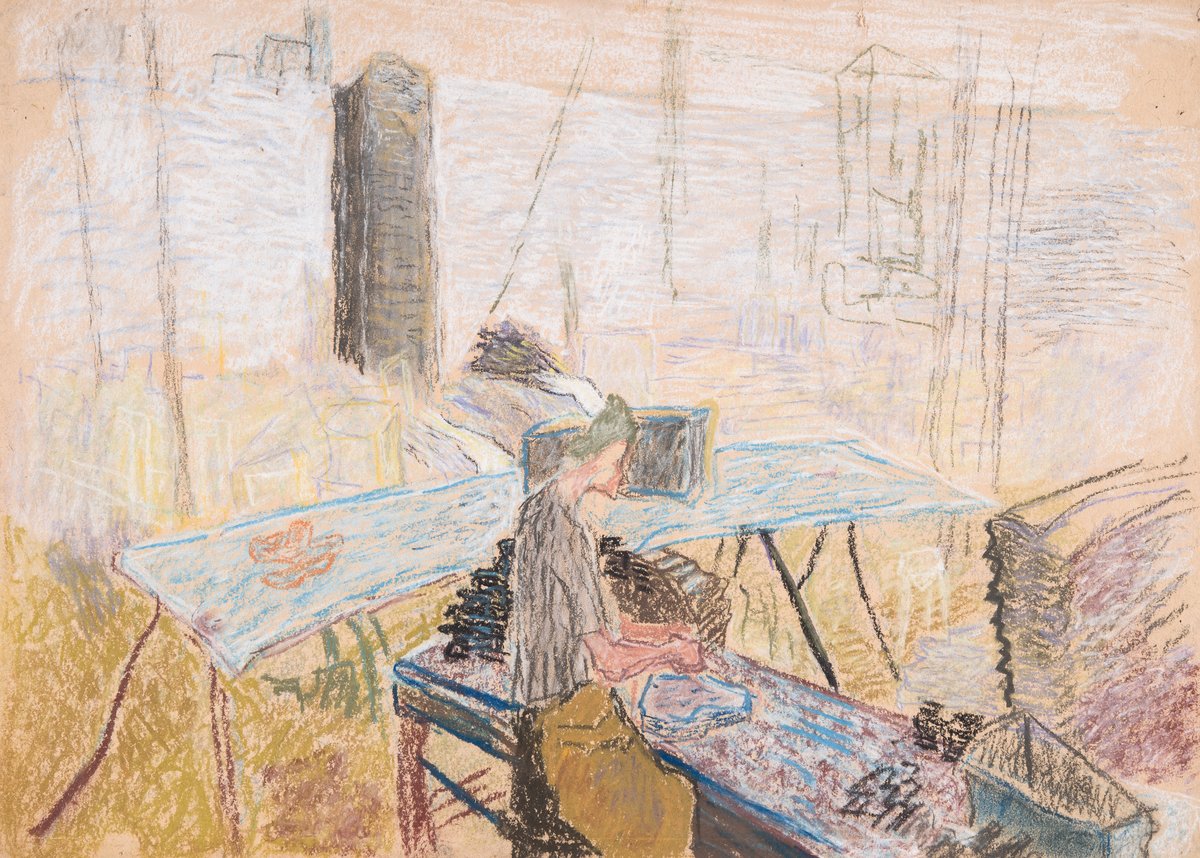 At the Workbench I Ilka Gedő

A selection of the exhibited works of Ilka Gedő

The art of Ilka Gedő as reflected in her writings, notes and in other documents

In autumn 1949, Ilka Gedő produced two variants of a work entitled Thinking Self-Portrait, in which she reflected on the drawings of Lajos Vajda. The head resting on her hand, the gazeless face, and the swirling charcoal of her skirt, reminiscent of her later charcoal drawings, seem to condense together the motifs used by Vajda. At this time, Ilka Gedő was tormented by doubts: “But if these Vajdas, that represent nothing in themselves, are works of art, then why does complying with the demands of depicting a model on paper require such brain-wracking concentration and effort? And why did I draw the skirt in exactly this way? Why did I not use points ... or any of the countless other ways?” This was her last autonomous drawing; she reached a breaking point in her inner values and decided to abandon art.

Pastel Study for the Oil Painting Portrait of Endre Bálint, 1968

In 1965, at her artistic rebirth, Ilka Gedő’s works were abstract caricatures. In her view, a person could be characterised by a single movement, pose or gesture, which she depicted in an exaggerated, caricaturising way, creating a complex and oblique visual relationship. In the works of the painter Endre Bálint, fragments of memory, imbued with nostalgia for childhood and the past, hover before fantastical inner landscapes. Ilka Gedő thus envisaged Endre Bálint as an almost bodiless flying creature gliding in front of an ethereal blue background.

Ilka Gedő found great delight in observing the life of plants. “The sense of nostalgia which caused her to turn towards plants, may also be compared to the plant cult of Art Nouveau artists. … Her plant series bears witness to her sensitive observations of … multicoloured flower bodies …” She was equally enchanted by the Jardin des Plantes and the Jardin du Luxembourg in Paris, the horticultural park in Pushchino, and the garden of her Aunt Júlia in Szentendre, where she spent several summers in the 1970s. Her pictures of plants and gardens were inspired by these locations and were not based on any of her “proto-drawings”. Her garden paintings are theatrical, unique in their planarity, and rather like tapestries for their dreamlike linearity.