The new dossier exhibition of the Museum of Fine Arts – Hungarian National Gallery presents a cross-section of the œuvre of József Molnár, a recognised and prolific painter of the nineteenth century. A contemporary of Károly Markó the Elder, Mihály Munkácsy and Pál Szinyei Merse, Molnár also felt at home in the international art scene, while advocating the importance of the cause of Hungarian culture. His paintings – including Warrior Dezső Sacrifices his Life for King Charles Robert – were among the first to enter a public collection in 1855, moreover, its lithographed version made its way to the walls of homes. The core of the exhibition comprising some 50 pieces is provided by the artist’s graphic works, paintings and photographs that were rarely or never on view in the past. Molnár’s prominent works are now placed in the context of the Hungarian Biedermeier and Romanticism, as well as academic monumental historical painting influenced by the Munich Academy, and the draughtsmanship bearing the tradition of Károly Markó the Elder’s landscapes.

József Molnár’s art is distinguished by diversity and an openness to anything new: during his long life he witnessed the flourishing of romanticism, Biedermeier, historicism, realism and naturalism, yet he never restricted himself to a single style or genre. He started out as a portrait painter, created still lifes and religious compositions too, made photographs, pursued genre and landscape painting throughout his life – but it was his historical painting that brought him fame.

Molnár’s diverse career yielded hundreds of paintings, paperworks and photographs. Thanks to the purchases made of his works by the Hungarian state, the collections of the Museum of Fine Arts – Hungarian National Gallery was enriched by graphical artworks and photographs in 2012, and by paintings of outstanding significance in 2016 and 2019. These new acquisitions provide the backbone of this bicentennial exhibition, for which a part of the works were recently restored. Included among such works is a portrait from the family photo gallery, depicting the artist’s wife, the young Berta Hänlein. This work survived pasted into a graphical album owned by Molnár’s descendants, and now, removed from there, it has been restored and mounted on a stretcher.

Besides Molnár’s first important historical scene, Warrior Dezső Sacrifices his Life for King Charles Robert, which can be regarded as a milestone in his art, visitors can see special works such as his monumental historical canvas titled The Destruction of Pompeii, displayed for the first time after more than a hundred years. The dramatic depiction of the volcanic eruption is contrasted in the exhibition to the genre painting Idyll in Pompeii, marked by delightful draughtsmanship and Biedermeier charm.

Landscapes represent the second most numerous genre in Molnár’s œuvre, and provide the other focal point of the exhibition. In both oil paintings and pencil drawings he captured landscapes that he loved much: the Lake Balaton region, the mountain ranges of the High Tatras and more gently rolling landscapes inhabited by groves.

The dossier exhibition lends special emphasis to Molnár’s photographs, which had thus far never been displayed to the public. They are presented here in enlarged reproductions. Some of them were taken in the studio founded in 1862 in Győr by the artist and his friend, the landscape painter Sándor Brodszky. The Molnár family’s photograph collecting and portrait photographing customs are also shown to visitors, allowing an insight into photographic art from the 1860s to the turn of the century.

The bicentenary of József Molnár’s birth provides the opportunity to present the thematic diversity of his paintings – spanning from the harmonious idyll of genre scenes to the tragic depictions of fate – mainly through the new acquisitions along with documents of his lesser-known photographic activity. This is a special moment in the history of the Hungarian National Gallery: works by József Molnár and those by Pál Szinyei Merse are exhibited simultaneously, allowing the parallel study of the two painters’ art. Molnár and the twenty-four years younger Szinyei are connected by their roots in the Munich Academy, but the contrast between their approaches and techniques place them at a far greater distance. However, in the handling of certain subjects – for example, the full-length depiction of a woman sitting in a natural environment, such as in Molnár’s Rendezvous and Szinyei’s Lady in Violet – the two artists come really close.

The exhibition is accompanied by a Hungarian- and English-language catalogue.

The exhibition can be visited with a ticket exchanged for the permanent exhibitions. 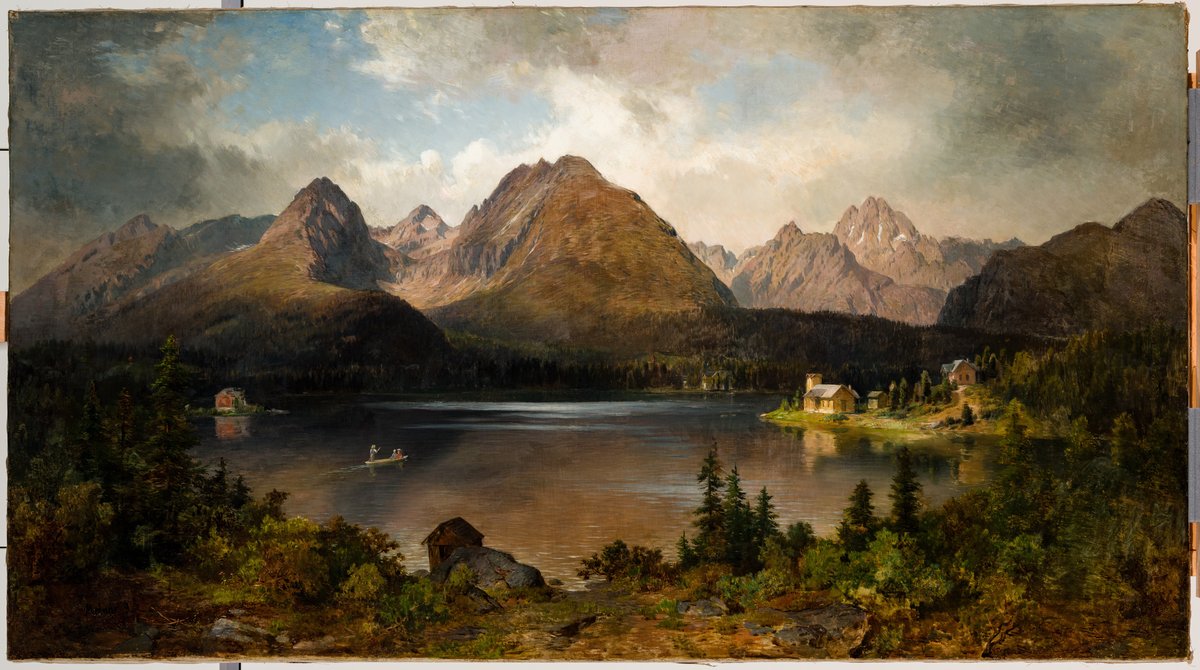 Italy as a theme rose to prominence in Molnár’s œuvre from 1875. His Idyll in Pompeii is imbued with a sunlit Mediterranean atmosphere with warm shades of red, brown and ochre. The composition is interwoven with amorous symbolism through a fountain with the figure of Amor, flowers, fruits and a pair of doves. Desire is also suggested by the female figures of subtle charm and idealised beauty, characteristic of Molnár’s art, dreamily looking at the white birds.

József Molnár: The Destruction of Pompeii, 1876

Diverging from the traditional iconography of Pompeii and Vesuvius depictions of his time, Molnár did not feature the contemporary volcanic actions but the historically remote, tragic eruption of 79 AD. In this especially large historical genre painting Molnár painted life-size characters, thus enlarging and ennobling the anonymous citizens of ancient Pompeii to the scale of national heroes and Hungarian historical figures. The daylight is darkened by eddying smoke, and the picture is covered by the grey colour of ash deposited over the entire city.

Molnár belonged to the great generation of Hungarian landscape painters who emulated the art of Károly Markó the Elder. His works equally feature stunning German and Austrian lakes, the regions of Tivoli, Capri, Venice and Naples, the High Tatras and the Lake Balaton, as well as his more immediate environment of Újpest, the Rákos Canal and Tápióbicske. He painted unified landscapes viewed from a distance, capturing the atmosphere of some main motifs. Over the course of six decades, Molnár moved from romantic landscapes to an increasingly realistic and naturalistic approach to nature.