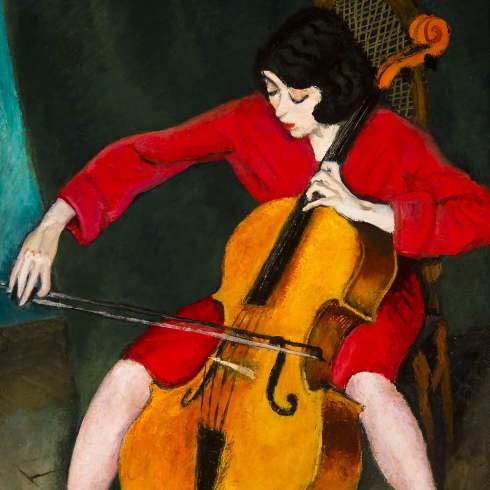 “Love is here again,
my palms are sweating again.

Love is as old as mankind. It is the strongest human emotion with its signs manifest in the body and the soul. For this reason, in the past the intense state of love was considered a disease, hence the term ’love-sickness’.  Love and its many forms have been treated in art in countless ways. Our tour will guide you through pictures showing different kinds of love: reciprocated love, tragic love and unsurpassable desire; of course you will also see a picture depicting the pain of parting.

Franz von Stuck: The Kiss of the Sphinx 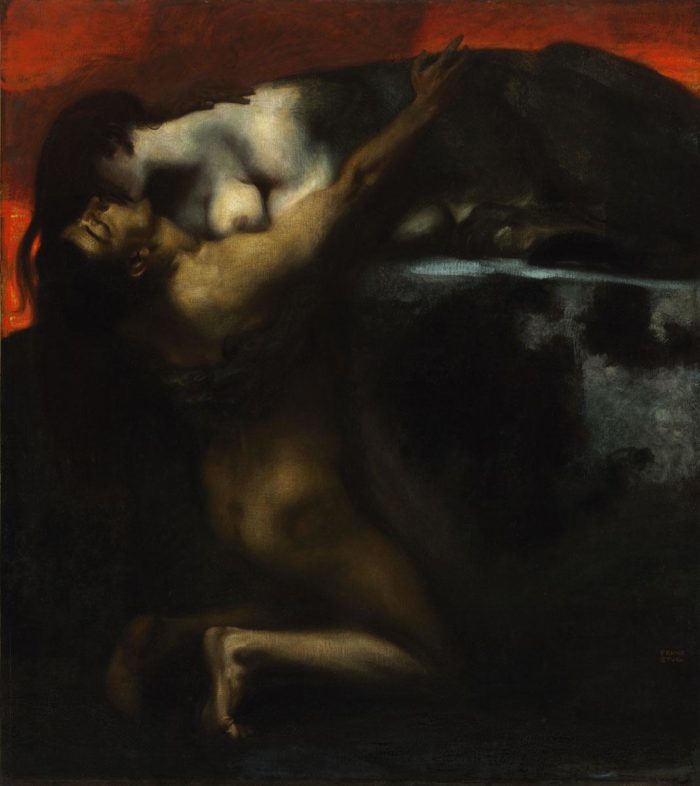 Selection from the Museum of Fine Arts’ Collection of International Art after 1800 Building D, 1st floor

“This is our final mating. Now the keen
Talon on feather tears the quick between”

The man in Franz von Stuck’s painting loses himself in the long and passionate kiss of a demonic woman of sensuous beauty and is killed by her deathly embrace. The listless and helpless male figure is at the sphinx’s mercy, unable to put up a fight with her: he can only succumb to her embrace.

As legend has it, a monstrous sphinx was sitting at the gate of Thebes and asked everyone who wanted to enter the city the same question: “Walks on four legs in the morning, two during the day and three in the evening. Who is it?” Those who could not answer correctly were devoured by her. The solution – man – was only provided by King Oedipus. Then, overcome by shame, the sphinx cast herself into the abyss and died.

It is man who crawls on fours as a child, walks on two legs as an adult and supported by a cane in old age. The above riddle addresses the eternal question of “Who am I?”: do I know myself, do I know where I come from, where I am and where I am going? Unless we can answer these questions, we are not ready: the sphinx will tear us apart.

In his work, the Symbolist painter Stuck was exploring mystery, ambiguity and mysterious connections. He used various tools to further intensify the eroticism of this scene: he used a narrow visual framing, strong colours, the sub-ordination of one body to the other and their contrasting colours.

Selection from the Museum of Fine Arts’ Collection of International Art after 1800 Building D, 1st floor

The story of Rodin’s lovers is encapsulated in a single sensuous kiss. The woman – the inspiring soul, who is the alpha and omega of everything – is in the centre.

Gulácsy is often dressed in costumes in his paintings: one of his favourite periods was the Italian Middle Ages and Renaissance. He himself designed these clothes and often paraded them in the street, or posed in them in photographs. He made costumes not only for himself but also for theatres, such as the famous Thalia Theatre. Donning different roles, he was able to step over into the realm of desires: he could become the magician and anything was possible.

The circus, theatre and masquerades were frequently depicted by artists at the turn of the 19th and 20th centuries and were looked upon as metaphors for life. In Vaszary’s view, life is but “an illusory image of revolving stage-sets and changing costumes”. Looking at the painting, you will inadvertently be invaded by a feeling of uncertainty: Who are these people and what is their relationship?

Are they a couple? Do they love each other or are they merely linked by the present moment?

Are they playing a frivolous game, or are we witness to a serious drama?

“Smouldering at the depth of every romantic meeting are naked ambition and vanity.”

Women played a major role in Róbert Berény’s life: after the end of his first marriage, he suffered from depression and a creative crisis, while meeting his second wife brought him the happiness he so much desired. Berény loved Etelka Breuer, featured in this painting, for the rest of his life, regarding her as woman, wife, destiny, mother and muse.

Etelka was a promising cellist. This picture also shows her playing the instrument with her eyes closed, introspectively. Berény used various tools of expression to capture the essence of music and the intimate experience of creation through music, trying to also underline the rhythm of the playing of the piece, even ignoring the rules of perspective and anatomy.

and dries on my face.”

The hallway in the picture is crowded and the couple bidding farewell virtually melts into the environment of coats and wallpaper. While the depiction of the mass of objects and the couple seems realistic, the overall impression is more surreal.