The 30th of January is one day away from the 222nd anniversary of Franz Schubert, one of the greatest classical composers of Vienna. We love Schubert and we might not even know that he composed some of the melodies that live on in our memory. Now let’s have a look at this portrait in our collection: one of the finest portraits in Hungarian painting depicting a thirty-year-old Franz Schubert. 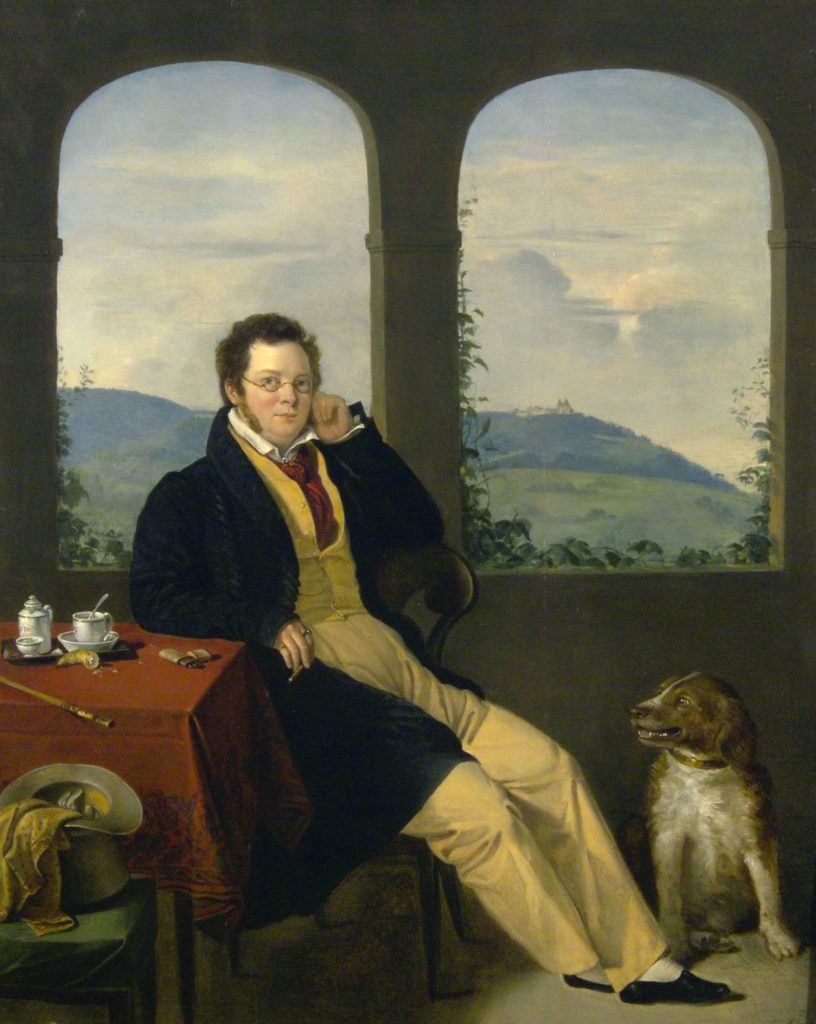 Gábor Melegh (1801–1832), hailing from Versec in Temes County (today: Timiș County in Romania) began his studies at the Academy of Fine Arts in Vienna in 1817 and with some short interruptions he lived in the Austrian capital for the rest of his life. We mainly know his portraits and lithographs, of which there are regrettably not too many but all of them distinguished by their high quality. In their studies Dénes Pataky and Anna Jávor explored Melegh’s oeuvre, while in a study in 1987 Ágnes Vayerné Zibolen discussed the history of this Schubert portrait and the painter’s liaisons within the Viennese art circles. Virtually nothing is known about the circumstances of the making of this picture. Although no available written records document Melegh and Schubert’s acquaintance, the friends they had in common, the many artists (primarily Károly Kisfaludy) they both knew, and the venues they attended together in Vienna provide sufficient grounds to assume that the two artists personally knew each other. This portrait is likely to prove the same.

The artistic approach and style referred to as the Biedermeier emerged around the late-1810s and defined the art scene of Central Europe all the way up to the 1850s. The Holy Alliance signed after the final defeat of Napoleon and the end of the revolutionary wars led to increased political censorship, which impacted the fine art scene too. The grand, universal ideals of Romanticism were gradually replaced in artistic depictions by the closed, unpoliticised and intimate world of the private sphere. Biedermeier artists advocated the sensible and emotional approach of the middle classes focusing on simplicity and cosiness. This was a period of portraits of children and families as well as genre pictures exuding sympathy, graciousness and middle-class simplicity.

Like Biedermeier depictions in general, this Schubert portrait also lacks any pictorial allusions to the composer’s genius, or the ‘greatness’ and confidence of the ‘chosen artists’. The picture shows not a great master but a middle-class individual delighting in the small gifts of life. We see Schubert, a passionate smoker and coffee drinker, sitting on a cosy veranda with his loyal dog, Drago, with the mountainous landscape of the environs of Vienna in the background. Still-life elements are given a special role: the table with cigarillos, a coffee set and a half crescent-roll evokes the image of middle-class prosperity and the attractive world of the Viennese Biedermeier through these objects. The figure of Schubert embodies a classical member of the middle-class, the Viennese citizen humbly enjoying the joys of life.

“G. von Melegh’s” portrait depicting Franz Schubert and providing the full name of the model went under the hammer almost exactly one hundred years ago, on 29th January in 1919, at the auction of the Wawra auctioning house in Vienna. The date of the painting, 1827, was published wrongly in the catalogue as 1837, which may partly explain why there was no interest in this work (since, the wrong date suggested it was made nine years after the composer’s death…). The picture was then purchased for a rather low price by Adolf Pick, an art dealer from Pest, who offered it for sale to the Museum of Fine Arts in March 1919 for the original buying price. The museum purchased the work and inventoried it in 1923, peculiarly, with the title Male Portrait. The answer to the question why the model’s identity was shrouded in mystery for decades can be found in Vayerné’s above-mentioned study. Despite the misread date and inaccurate title, this picture will remain what it always has been: an excellent portrait of one of the composer geniuses of the era painted by a great Hungarian painter.