Please welcome the interview with Anna Zsófia Kovács, head of collection of International Art after 1800 about our exhibition The Surrealist Movement from Dalí to Magritte – Crisis and Rebirth in 1929! 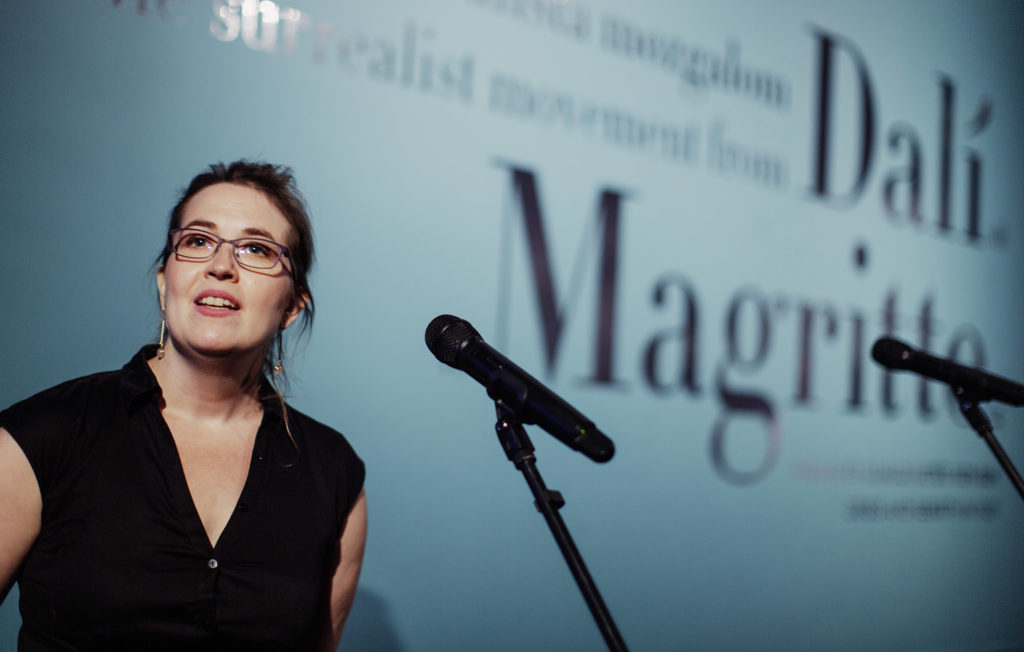 Why didn’t you wait with the exhibition until 2024, the centenary of the birth of surrealism in 1924? Wouldn’t that be a more round anniversary?

1929 was also a prominent year, so the ninetieth anniversary of that should also be celebrated. Five years after the Surrealist Manifesto was issued, the problems that were coded from the start could already be seen; moreover, a lot of important artists, including Dalí, appeared on the scene in that year. The Andalusian Dog had its debut in Paris in 1929 too. Of course there’s also a practical reason why we’re having the exhibition now: it was organised in cooperation with the Pompidou Centre, and it went to Pisa last year, and we have the opportunity to bring it to Budapest now.

Does it mean that visitors to the Budapest exhibition will see the same show as the one mounted in Pisa?

We’ve modified the list of exhibits and the sections but the exhibition is two-thirds the same and 90 percent is from the collection of the Pompidou Centre.

Are there any Hungarian works added?

We have to be careful here, since we can’t talk about a significant surrealist movement in Hungarian art in the ’20s and ’30s, but there are some Hungarian works too: photographs by Brassaï and André Kertész. Surrealism underwent several revivals: the first one was exactly in 1929, then during World War II, when artists found a safe haven in New York and had a major influence on American art. Just think of Jackson Pollock – the concept of automatism lived on in his art. Surrealism retained its appeal later, after the war too; many South American artists joined the movement and Hungarian surrealism came into its own at this time too. There is an exhibition about Hungarian surrealists at the Ferenczy Museum in Szentendre right now.

Is it similar to the one at the National Gallery?

No, our exhibition has an entirely different concept: it is built around one place, Paris, and we focus only on one year, 1929. We portray the whole through looking at a part. In contrast, the exhibition in Szentendre documents a larger period of time. It’s worth viewing both exhibitions and comparing them. They do not clash with but complement each other.

Is it conjuring up the past or does surrealism still have validity today?

If we think of the already mentioned Andalusian Dog, there are images in it that are still powerful. The eye and the razor… A lot of my friends are unable to watch that scene. So this film is still affecting viewers ninety years after its debut. Although the same is not always true for surrealist paintings, the reason why we might see them as nothing unusual is because works that were made later often drew on surrealism. These elements have become such an integral part of the toolkit of art, our visual culture, that we can no longer notice their effect.

Is escapism at the heart of surrealism? Not focusing on the terrible social and tangible reality but on our dreams, something beyond reality?

Yes, that’s basically right, but surrealists responded differently, by retreating into their inner worlds or by taking a revolutionary stance with its message being to shake off the shackles and cast aside rules. But there was also a trend which did not reject reality but looked at it from a different angle: artists gathered around Georges Bataille represent this approach, while André Breton was in search of beauty. These artists found everything that is bizarre and shocking in reality – at this point it is important to mention Eli Lotard and Jacques-André Boiffard, who were looking for the aesthetics of ugliness. Their innovation was reinterpreting reality and disgust, and showing misshapenness.

Have you got a favourite “ugliness” in the exhibition?

I don’t normally have favourites but there are many intriguing works. I’m proud to say that this exhibition brings major works by the greatest names of surrealism to the public.

What works by Dalí are on display here?

Five of his works are exhibited and The Andalusian Dog will be screened. These five works are linked to the film, they were made at the same time and have a similar symbolism. Let’s take his Scatological Object Functioning Symbolically, which is really bang on. It is not typical Dalí because it is an object and not a painting. It is a shoe, a precariously balanced ensemble of objects. The fetishist allusion is obvious. It was around this time that the surrealists began to turn their attention to objects. Walking around the flea markets, they discovered unusual objects that fascinated them, or they assembled everyday objects in unusual ways. Objects functioning symbolically were among these: they typically had a sexual connotation.

Dalí was extremely versatile. He wrote large-scale, theoretical pieces around 1929, also made a film, paintings, and objects.

Picasso is included in the exhibition. Was he also a surrealist?

He was close to surrealism in the 1920s and 1930s. He knew everybody who mattered and the surrealist periodicals referred to him as a model but he never actually officially joined the movement. Clearly defined, doctrinarian trends were not exactly his world. However, the forms and language of surrealism also pervaded his oeuvre. The exhibition includes a work by him with the theme of the Minotaur. This motif played a key role not only in Picasso’s art but for all the surrealists. The Minotaur is a hybrid being, half bull and half human, and symbolises the conflict between the intellect and bestiality, which was a central concern in surrealism.

How did they resolve this conflict?

Forget the mind and release the animal. That was their answer. Even the surrealist magazine launched in 1930 was named Minotaure. Picasso turned to the theme of the Minotaur in 1927, and he made the painting displayed in our exhibition in 1928.

Is it only the choice of subject that makes this picture a surrealist piece?

No. If you have a closer look, it looks more like a horse or a calf, we don’t know if it is chasing somebody or it is being chased. It is an ambivalent figure. The Minotaur is especially important in Picasso’s art. At times it is depicted as a cruel creature that treads out everything, but sometimes it falls victim to its own desires, so it has a self-portrait aspect too.

Overstepping boundaries is characteristic of the whole avant-garde. What is the significance of surrealism within that?

It was the longest period of the avant-garde. It emerged around 1920, became an official movement in 1924 and lasted all the way up to the 1960s. It spread across the globe. It was a literary movement and a philosophy, and it permeated all the branches of art.

What can we see in Magritte’s Double Secret?

It looks as if the figure was slit in half and shifted away in space. By doing this Magritte emphasised that a picture is always an act of deception. It hasn’t got three dimensions, but only pretends that it does. The issue of the mask, another key concept in surrealism, appears here too. What is it that we show to the world and what is it that resides in us? That is a fundamental question. Looking at it more carefully, we can discover little bells, attributes of the fool, or court jester. In other words, behind the mask of the well-kempt and socially appropriate exterior, madness and play are inside of us.

Is this something Magritte himself said or did he leave the interpretation up to the viewer?

Both. Magritte held lectures but he liked choosing titles for his works that posed questions. The title Double Secret makes perfect sense. But why did he give the title The Red Model to a picture of shoes ending in human feet? This is a mystery.

How much were these pictures worth ninety years ago? Did they sell for a lot even then?

I have no exact figures but the surrealists were not unsuccessful artists. They had exhibitions, sold pictures, and had patrons. For example, a wealthy couple – Charles and Marie-Laure de Noailles – supported surrealist films, such as Buñuel’s The Golden Age, and The Secrets of the Cube’s Palace, the latter of which was filmed in their villa in the south of France.

What works will be exhibited from Miró’s oeuvre?

Four and a half works.

I understand four but how can something be half a work?

There are exquisite corpses. That’s how.

What do you mean?

The exquisite corpse is the name of a surrealist game. Somebody draws a head, folds the paper, then someone else draws a body, and in the end they unfold the paper and look at the collectively assembled drawing.

Why is it called exquisite corpse?

This game was first played with words, and the first sentence that was assembled went like this: “The exquisite corpse shall drink the new wine,” in French of course. Hence the name given to the game. These are collective works: they are not signed; the artist and the artist’s intention disappear. In any case, we have an exquisite corpse at the exhibition that Miró drew one part of. Miró arrived in Paris in the early 1920s. He was an enthusiastic surrealist and signed the first manifesto, but always preserved his individuality. He did not adopt the technique of surrealist automatism, during which free rein is given to thought and the movement of the hand. It creates a world of imagination and dreams. For a long time, it was actually questionable if surrealist painting per se could exist, since it required training and technical skill. It is not spontaneous either because it takes time to produce it. Questioning painting was an important motif with the surrealists. Miró, for example, wanted to kill painting. At the same time, he made paintings.

Quite a contradiction, isn’t it?

Contradiction is not alien to surrealism.

Here is another painting. In what way is this a surrealist work?

Yves Tanguy. He really has a misleadingly realist style. His forms are nicely painted and seem to be objective and easy to identify. From a distance his pictures seems to show existing, real things. But if we step closer, we see endless objects and biomorphic shapes impossible to decipher. To discover this, however, you need to go really close. So that is one good reason to come to the exhibition.