Born on 27 March 1676, Francis Rákóczi II, ruling prince of Transylvania, leader of the Kuruc forces – Hungarian partisans who fought against the Habsburgs – and an exile, is one of the best-known heroes in Hungarian history. If nothing else, his portrait is well known from 500-forint banknotes. Almost every town has a street or square named after him, in addition to sports associations, schools, beers, salamis, restaurants and much more. And if Rákóczi had not been a ruling prince but instead merely one of the unknown heroes in Hungarian history, it would still be worth remembering him, since Ádám Mányoki’s (1673–1757) depiction of him is one of the most beautiful portraits in Hungarian baroque painting. 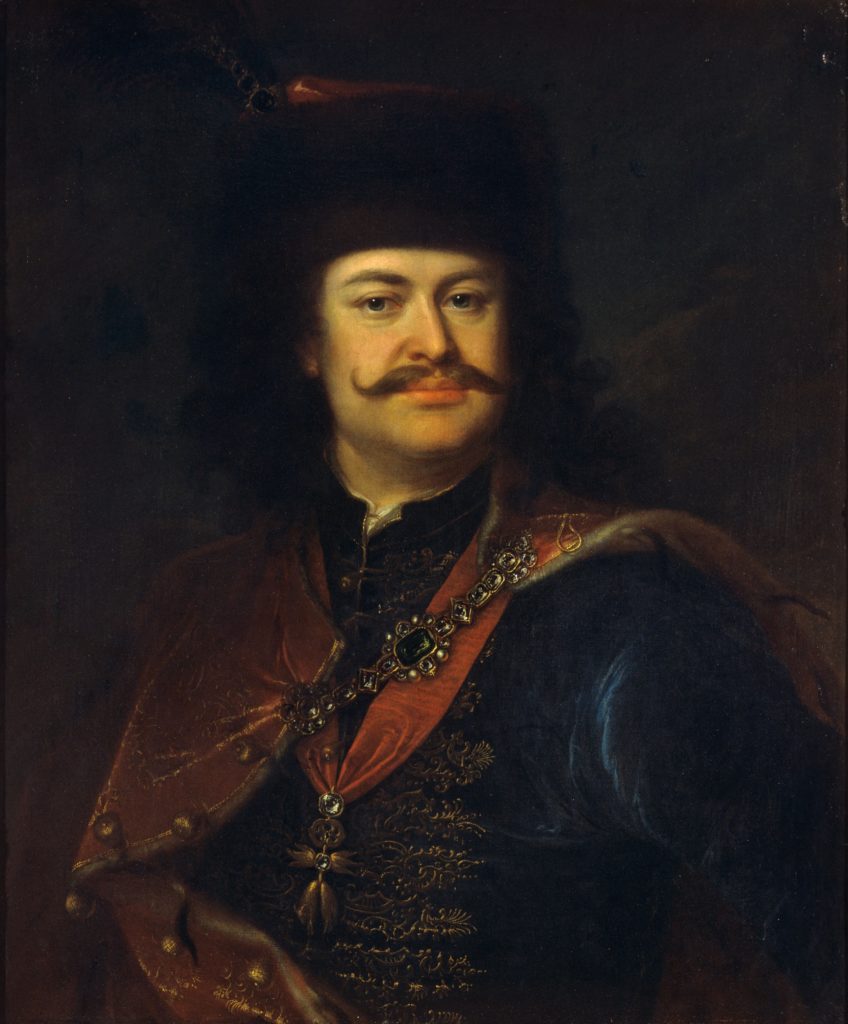 In 1707 Rákóczi recalled Mányoki back home from Berlin, where he was residing, and appointed him court painter with a high salary, commissioning him to learn copper engraving and to produce portraits suitable for proclaiming his sovereignty as a ruling prince all over Europe. Rákóczi was intent on using the propaganda tools of art and indeed dispatched Mányoki to Brussels, Holland and Berlin in 1709 in the company of one of his high-ranking diplomats. When Rákóczi travelled to Poland in 1711 to participate in negotiations, he was still unaware that the Kuruc war of independence had come to an end, the Treaty of Szatmár had been signed, and he could no longer return home. Just at this time Mányoki was again residing in Berlin, where he received Rákóczi’s letter inviting him to Gdańsk. The painter arrived in Poland in early 1712, and completed his great portrait of the ruling prince in that same year. The decoration of the Order of the Golden Fleece that can be seen on Rákóczi’s chest in the depiction had been awarded to him by the king of Spain in the same year, in 1708, but he was only able to receive it in person in 1712. This portrait of Rákóczi, outstanding in both Ádám Mányoki’s oeuvre and European portrait painting at the time, found its way into the collection of Ágost Erős, king of Poland and Saxon elector, and it remained the property of the Saxon royal family right until the end of the Holy Roman Empire. Disputes on the ownership rights over the work between Germany, which was formed into a republic after 1918, and the royal family of the time were only resolved in 1925. This is also when the Hungarian history of the picture began.

Marcell Nemes (1866–1930), one of the most important and wealthy art collectors of his era, continuously tried to procure the painting from 1913. Then, the clear legal situation that developed in 1925 allowed him to immediately reach an agreement with the royal Saxon owner and he finally got Mányoki’s portrait in exchange for some valuable porcelains and other precious pieces. “But don’t think that the Saxon royal family lost out. No, I was careful that they wouldn’t. I gave artworks in exchange for the Rákóczi [portrait] that were invaluable treasures indeed for the Saxon royal family. They were beautiful royal heirlooms, among which the most valuable was perhaps the porcelain sculpture of the Saxon king, Ágost Erős, of which no replica exists”, declared Nemes in the newspaper Újság. He donated the portrait, regarded as a “national heirloom” in Hungary, to the Museum of Fine Arts immediately after it was returned to the country; its debut took place in the museum at a festive exhibition on 22 April 1925, attended by Governor Horthy and other dignitaries. The minister of culture, Kunó Klebelsberg, thanked Nemes for his generous donation on behalf of the whole nation before the National Assembly. Posterity can also be grateful to Marcell Nemes, whose name – literally meaning ‘noble’ – is rightly associated with those wealthy people who always sought to contribute something to society and not to take from it.

Mányoki’s portrait of Rákóczi has been displayed in the rearranged baroque exhibition of the Museum of Fine Arts since November 2018.